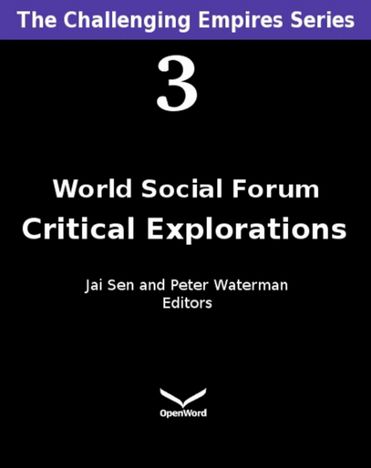 <em>“Be the change you want to see in the world.”</em>
(Mahatma Gandhi, activist and philosopher from India, 1869-1948, internationally respected for his doctrine of non-violence)

Our world is today at a time of enormous change. On the one hand, there is tremendous scientific and technological change taking place, which in turn is contributing powerfully to widespread social and cultural change of many kinds; there are enormous changes in the world economy leading both to a massively growing concentration of wealth and also to a deepening and widening of precarity across the world; and we are in an accelerating and deepening ecological crisis as a consequence of massive overconsumption and the rape of Mother Earth.

On the other hand, there is intensifying social and political resistance, now across the world and across many sections of societies, both to the negative impacts of all these changes and also to continuing structural injustice in all societies and to continuing colonialism – and also assertion, towards building a more just world. In many ways, the past two decades – the last of the 1900s and the first of the 2000s – have been an extraordinary period in all these terms. The movements seem to have peaked during the year 2011, with major protest movements and irruptions taking place in many places both in what is often now termed ‘the South’ – in some circles still referred to as ‘developing (or ‘emerging’) countries’ - as well as the North, the more industrialised countries. In some places it has already overthrown dictators, governments, and corporations, and forced others into retreat; and there are also now many signs of a growing massification of this upsurge, both within nations and across regions.

Although the World Social Forum – formed precisely during this period and irruption, in 2001, in counter-position to the World Economic Forum and to neoliberalism more generally - may not be at the very centre of such movements (as has been claimed by some), it has certainly become an important actor in this process. Arguably, it has inspired hundreds of thousands (and maybe even millions) of women and men across the world to come together and try and think through and act on its slogan ‘Another World Is Possible !’. As such - and although it has also been strongly critiqued – it has come to be quite widely seen and projected as a major contributor to progressive social change.

But to be the change we want to see, and to think out other worlds, we have to know what we want. This book, <em>World Social Forum : Critical Explorations</em>, is a sequel to the 2004 book titled <em>World Social Forum : Challenging Empires</em> (Viveka, New Delhi; edited by Jai Sen, Anita Anand, Arturo Escobar, and Peter Waterman) and to its international second edition in 2009 (Black Rose Books, Montreal; edited by Jai Sen and Peter Waterman). It brings together some 35 essays from around the world &ndash; from authors young and old, women and men, black brown and white, and activists, scholars, and those in between &ndash; that enable us all to critically explore and understand this important phenomenon called the World Social Forum; and so to better know what kind of world we want to see and to build.

Jai Sen is a researcher based in New Delhi, India, and now also in Ottawa, Canada. An architect by training and first practice, he became an activist around the rights of the labouring poor, and is now a student of the history and dynamics of movement. Seeing critical reflection as a potent contribution to building transformative power, his present work is around creating spaces for reflection in movement, in different media. Author, editor, and/or co-editor of several books and articles on movement and the globalisation of movement, he is presently Director and coordinator of CACIM (Critical Action : Centre in Movement) and Co-Coordinator of OpenWord.

Peter Waterman taught at the Institute of Social Studies, The Hague, for nearly thirty years, and has specialised on international labour and social movements. He has been active in internationalist activities all his life, and now blogs @ http://www.unionbook.org/profile/peterwaterman. He is the author of Globalisation, Social Movements, and the New Internationalisms (now also as ebook @ continuumbooks), Recovering Internationalism, Creating the New Global Solidarity : Labour, Social Movements and Emancipation in the 21st Century (first edition on the Choike website), and of Under, Against, Beyond : Labour and Social Movements Confront a Globalised, Informatised, Capitalism (Helsinki : Into Books, available free @ into-ebooks.com). He is also co-editor of World Social Forum : Challenging Empires (first edition, Viveka, New Delhi, 2004, available at choike.org and openspaceforum.net and second revised edition, Black Rose, Montréal, 2009) and of World Social Forum : Critical Explorations (OpenWord 2012).

Be the first one to write a review for the book World Social Forum : Critical Explorations.

Sound from the Silence: The Spy Who Was ...
Aslam Ansari