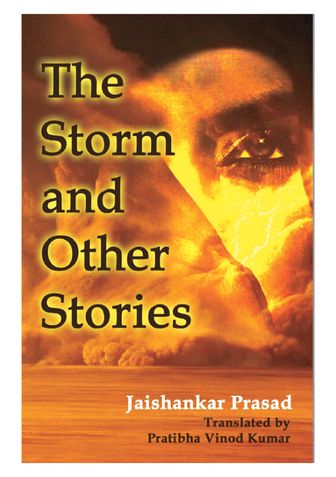 The Storm and Other Stories (eBook)

This book brings together some of Jaishankar Prasad’s finest stories. One of Prasad’s many outstanding contributions is that he made stories a part of modern-day life. He had the ability to connect the external events of daily life to their emotional consequences on human hearts.
Stories like The Storm, The Guiding Light and Mamta have the power to evoke inner turmoil even as they recount history. The Reward is an example of historical fiction which reminds us that our present is not that different from the past.

These stories reveal Prasad’s personality and intellect. They should also be assessed from the perspective of the times in which they were written. Most of the stories in this collection feature a character who contributes in some way to the upliftment of the downtrodden, the lonely, and the forsaken. The events have been woven together with thoughts on inner conflict and philosophy, reflecting Prasad’s effort to produce an awakening in his readers.

Shri Jaishankar Prasad (1889–1937), fondly called Prasad Ji, is not merely a great poet but a phenomenon with no parallel in Indian literary history.
He was born on 30 January 1890, in an aristocratic family of Varanasi, in the state of Uttar Pradesh. He was admitted to a pathshala, a small school, run by Master Mohini Lal. But his parents’ early passing away cut short his formal education to eight years of school. At home, eminent teachers were hired to teach him Hindi, English, Sanskrit and Persian. He gained deep knowledge by studying Indian history, Sanskrit, literature, philosophy and the Hindu scriptures by himself.
Prasad Ji drew inspiration from Hindu scriptures, the Vedas, Puranas and Upanishads, to create the epic poem Kamayani, which has inspired many generations of scholars and intellectuals. He is one of the most eminent four pillars of the Chhayavad movement, which emphasised spiritualism, humanism and romanticism, in Hindi literature. His contributions to Chaayavad have a spiritual base and universalism that touches the human heart. Prasad Ji’s literary output straddled the genres of poetry, drama and fiction. He pioneered historical drama set in ancient India.
When Prasad Ji’s glory was at its peak, he developed tuberculosis, which had no remedy at that time. Chanting the name of Lord Shiva, he breathed his last on 15 November 1937. The moment of his death occurred during Brahma Mahurta, an auspicious period of forty-eight minutes that ends forty-eight minutes before sunrise and is considered the most auspicious period for meditation in Hindu thought. He was an ardent devotee of Shiva.
Legions of Prasad Ji’s fans believe that he had attained enlightenment. There is a divine element in his thought, which has a spiritually uplifting effect on the reader.

Pratibha Vinod Kumar is the penname of a husband-and-wife team. Pratibha Kumar passed away in 2020, and her husband Vinod Kumar continues to bring their collaborative work to fruit.
Pratibha Kumar (1941–2020) obtained an M.A. in English Literature with a Gold Medal from Rajasthan University, Jaipur. She taught English at Banasthali University (then Banasthali Vidyapith, Rajasthan) during 1963–1966, at St Michael’s School (Durgapur, West Bengal) from 1966 to 1985 and at Rotary Public School (Gurgaon, Haryana) from 1985 to 1991. Her translation into English of Jai Shankar Prasad’s epic poem Kamayani was published in Hindi in 2013. This translation won the Samman Patra award from the Shri Jaishankar Prasad foundation. The Dancer, Her Lover and the Yogi, her translation of Bhagwati Charan Verma’s landmark novel Chitralekha was published in 2015. Bride of the City, her translation of Acharya Chatursen’s epic Vaishali Ki Nagarvadhu, is scheduled for release in 2021. Pratibha also completed a draft translation of Prasad Ji’s famous play Dhruvswamini, scheduled for release in 2022.

Be the first one to write a review for the book The Storm and Other Stories.