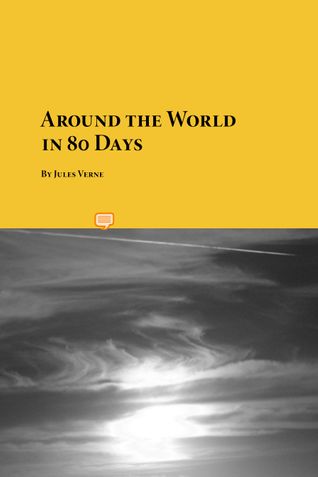 Around the World in 80 Days (eBook)

It was at least certain that Phileas Fogg had not absented himself from London for many years. Those who were honoured by a better acquaintance with him than the rest, declared that nobody could pretend to have ever seen him anywhere else. His sole pastimes were reading the papers and playing whist. He often won at this game, which, as a silent one, harmonised with his nature; but his winnings never went into his purse, being reserved as a fund for his charities. Mr. Fogg played, not to win, but for the sake of playing. The game was in his eyes a contest, a struggle with a difficulty, yet a motionless, unwearying struggle, congenial to his tastes.

Phileas Fogg was not known to have either wife or children, which may happen to the most honest people; either relatives or near friends, which is certainly more unusual. He lived alone in his house in Saville Row, whither none penetrated. A single domestic sufficed to serve him. He breakfasted and dined at the club, at hours mathematically fixed, in the same room, at the same table, never taking his meals with other members, much less bringing a guest with him; and went home at exactly midnight, only to retire at once to bed. He never used the cosy chambers which the Reform provides for its favoured members. He passed ten hours out of the twenty-four in Saville Row, either in sleeping or making his toilet. When he chose to take a walk it was with a regular step in the entrance hall with its mosaic flooring, or in the circular gallery with its dome supported by twenty red porphyry Ionic columns, and illumined by blue painted windows. When he breakfasted or dined all the resources of the club—its kitchens and pantries, its buttery and dairy—aided to crowd his table with their most succulent stores; he was served by the gravest waiters, in dress coats, and shoes with swan-skin soles, who proffered the viands in special porcelain, and on the finest linen; club decanters, of a lost mould, contained his sherry, his port, and his cinnamon-spiced claret; while his beverages were refreshingly cooled with ice, brought at great cost from the American lakes.

If to live in this style is to be eccentric, it must be confessed that there is something good in eccentricity.

The mansion in Saville Row, though not sumptuous, was exceedingly comfortable. The habits of its occupant were such as to demand but little from the sole domestic, but Phileas Fogg required him to be almost superhumanly prompt and regular. On this very 2nd of October he had dismissed James Forster, because that luckless youth had brought him shaving-water at eighty-four degrees Fahrenheit instead of eighty-six; and he was awaiting his successor, who was due at the house between eleven and half-past.

Phileas Fogg was seated squarely in his armchair, his feet close together like those of a grenadier on parade, his hands resting on his knees, his body straight, his head erect; he was steadily watching a complicated clock which indicated the hours, the minutes, the seconds, the days, the months, and the years. At exactly half-past eleven Mr. Fogg would, according to his daily habit, quit Saville Row, and repair to the Reform.

A rap at this moment sounded on the door of the cosy apartment where Phileas Fogg was seated, and James Forster, the dismissed servant, appeared.

‘The new servant,’ said he.

A young man of thirty advanced and bowed.

‘You are a Frenchman, I believe,’ asked Phileas Fogg, ‘and your name is John?’

‘Jean, if monsieur pleases,’ replied the newcomer, ‘Jean Passepartout, a surname which has clung to me because I have a natural aptness for going out of one business into another. I believe I’m honest, monsieur, but, to be outspoken, I’ve had several trades. I’ve been an itinerant singer, a circus-rider, when I used to vault like Leotard, and dance on a rope like Blondin. Then I got to be a professor of gymnastics, so as to make better use of my talents; and then I was a sergeant fireman at Paris, and assisted at many a big fire. But I quitted France five years ago, and, wishing to taste the sweets of domestic life, took service as a valet here in England. Finding myself out of place, and hearing that Monsieur Phileas Fogg was the most exact and settled gentleman in the United Kingdom, I have come to monsieur in the hope of living with him a tranquil life, and forgetting even the name of Passepartout.’

‘Passepartout suits me,’ responded Mr. Fogg. ‘You are well recommended to me; I hear a good report of you. You know my conditions?’

‘Twenty-two minutes after eleven,’ returned Passepartout, drawing an enormous silver watch from the depths of his pocket.

Around the World in 80 Days

Be the first one to write a review for the book Around the World in 80 Days.