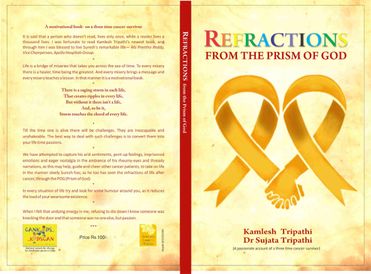 Refractions ... from the Prism of God (eBook)

REFRACTIONS ... FROM THE PRISM OF GOD

What goes on in a cancer patient’s mind is not known even to his near and dear ones, what to talk of anyone else. Maybe, only the invasive part is revealed, and the rest remains within the confines of the patient’s mind.
It is said about cancer; that only the ones who have seen cancer from close quarters are sensitive about it, and the rest are not. This includes cancer patients, their near and dear ones, Parents of child cancer patients, and also people who have lost their loved ones to cancer.
A normal and healthy person may not even think about cancer, forget reading about it, because your mind is perennially clouded by a plethora of interesting things around you where the word ‘cancer’ is somewhat uneasy and eerie. But there is still a need to communicate to the society about the incessant suffering of a cancer patient.
The book does exactly that. It communicates the mindset and sufferings of a poor, young and a three time cancer survivor ‘Suresh’ from Chennai in a comforting and engrossing manner that readers would like to read. First time when Suresh got cancer he was six, and then he was okay for a decade and a half. But it struck again when he was twenty one and again when he was twenty four. All three were different types of cancer.
Suresh wanted to tell his story for the benefit of other cancer patients, primarily, to make them understand about the formidable challenges a young cancer patient has to face; where he has his entire life in front of him in terms of his school, college and professional education, career and aging parents, when he doesn’t even know how long he is going to survive and in all of that he builds his determination and alters his mindset to take cancer head on.
Number of cancer cases in the world, are on the rise and there is a great need to communicate the sufferings, trauma, and the challenges of a cancer patient to people in general, but there are very few volunteers for this. Also, there is need to communicate how to handle such situations, and more importantly make people realise that cancer is conquerable.
The book has a motivational slant that cheers you up with peppy poems and morale raising short stories, while it unfolds the grit and determination of the protagonist.
The author of this book is Kamlesh Tripathi and co-author Dr Sujata Tripathi who had lost their younger son to brain cancer some years back.
The book is co-published by Cankids ... Kidscan and Shravan Charity Mission. Both are NGOs that work for children suffering from cancer.
The gutsy founder of ‘Cankids ... Kidscan’ is Ms Poonam Bagai who herself is a colon cancer survivor but that has not deterred her from taking the noble cause of helping poor children fight cancer.
Sharvan Charity Mission is also an NGO that was started by the author and the co-author in the name of their late son ‘Shravan’ that too works for child cancer.
The sales proceeds arising out of this book would be diverted for the treatment of poor children suffering from cancer.
***

Author, Kamlesh Tripathi lost his younger son ‘Shravan’ in 2009. He was suffering from brain cancer. It was a long battle that he fought for fourteen years. Since then he has become a Cancer activist. Through his ‘Trust—Shravan Charity Mission’ he serves poor children, suffering from life threatening diseases. He has been a senior corporate citizen, for more than three and a half decades, but now works for the noble cause.
He took up to writing to tell his long tale of agony, so that others could benefit. ‘Gloom behind the Smile’ his first book was published in 2011 and since then it has been catalogued in many prestigious libraries of the world such as, the Library of Congress, Washington DC; Ames Library, University of Minnesota, USA; Library of University of Chicago, Chicago University; Libraries and Archives of Canada; and the Library of Cancer Aid and Research Foundation, Mumbai. It has benefitted many cancer patients, their near and dear ones and even doctors and medical staff.
His second book ‘One to Tango … Ria’s odyssey’ is a fiction on the social topic of ‘singlehood’ and is now catalogued in the prestigious library of Connemara in Chennai and his last book ‘Aadab Lucknow … fond memories’ is a fiction on his hometown Lucknow, showcasing its exquisite culture and the pristine Hindu-Muslim brotherhood, was released during the ‘Lucknow International Literary Festival- 2014.’
He willingly writes for the cause of cancer, and contributes the proceeds.

Co-Author, Dr Sujata Tripathi, is an ardent personality, keen teacher, loving mother and a devoted wife. Ph.D in Education from Banaras Hindu University is presently, Principal of Ramanujan College of Education.
A determined fighter, who for fourteen years fought ‘brain-cancer,’ that afflicted her younger son ‘Shravan.’ She understands pain, so works for the cause of economically deprived children suffering from life threatening diseases through her NGO- ‘Shravan Charity Mission.’
Reader, writer and music lover; she is also a keen traveler and has travelled extensively both in India and abroad. A quick learner of languages; speaks with malleable ease, Dogri, English, Hindi, Nepalese, Punjabi, and Tamil. Her interest is ‘linguistics’ where she has authored a book on ‘Methodology of English Teaching’ and fancies writing even otherwise, where she has co-authored ‘Aadab Lucknow … fond memories’ a fiction on the city of Lucknow, showcasing its delicate culture; that was launched in Lucknow International Literary Festival-2014.
You can reach both the author and co-author at:
http://kamleshsujata.wordpress.com
kamleshsujata1.blogspot.in
https://www.facebook.com/shravan.shravancharitymission
https://twitter.com/missionshravan
E-mail: shravancharitymission@gmail.com
https://www.facebook.com/sujata.tripathi.98

Refractions ... from the Prism of God

Be the first one to write a review for the book Refractions ... from the Prism of God.

We Were, We Are
Nalini Tandon and Prabhat N. Tandon