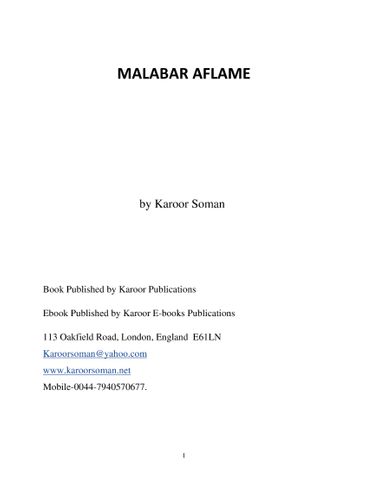 A riveting story of love, revenge, and retribution across continents and generations. Antony from Cochin, India lands in London in the thick of the Fuhrer's wrath on Britain. He has the strange company of Ali Abdulla from Kashmir, brought to the island nation by Peter Scot, a racehorse tycoon. The stage is thus set for an era of intense intrigue, passionate love, and bloody revenge leading up to the bombing of the high-speed Channel train connecting London with Paris. How an award-winning British born young engineer's mind works to wreck the ambitious project lends an explosive end to the novel. Alternatively set in India's greenest state of Kerala and the most beautiful place on earth Kashmir and London, the hub of the remains of a superpower that once ruled the world and ruled the waves. Story of an ethnic minority's yearning for survival in a melting pot of many cultures that is the UK.

London based, Indian, Kerala State born writer from Charumood, is a Malayalam and English writer. Son of Karoor Samuel and Mother Rachel Samuel. He has written dramas, novels (including English), stories, poems, Children’s novel, history, biographies, essays, travelogues, sports, science and tourism. Till date, he has fifty one books published by well known publishers which spans four decades and he has visited thirty five countries. He has received more than twenty prestigious awards and recognitions from prime minister, chief ministers and literary personalities.
During his high school years, he started writing poems for Balarama(division of most popular newspaper in Kerala,India) children’s magazine and later he turned to write radio dramas of which Kartanittu and Karmekham were broadcasted by Trivandrum and Thrissur radio stations in Kerala. After the 1970s, he was the only youth member for the Kerala Yuvasahitya Sakyame from Mavelikara which was run by Malayalam Manorama, Kottayam. In 1972, his controversial drama "Eruladanja Thazhwara” was presented at Thamarakulam High School. The play portrayed the abuse of police towards society. He got the best character actor in the competition at the Annual Day Celebrations. This drama was watched by some of the attending student's parents who worked at the Mavelikara police station. After the drama some of the police personnel accused him of being a naxalite and threatened him. The police came to know that the same drama was to be played at the Nooranadu Leprosy Auditorium on their Annual Day. As predicted the police were not so pleased about this news and decided to plan a trap for him. They conjured a false police case against him connected with Naxalite group and had him arrested, beaten and tortured at the Mavelikara police station. This was his first punishment for bringing out the love and truth that he had towards literature writing. The police and his parents threatened him to stop writing or leave Thamarakulam/Charumood. Lastly he escaped to North India, Ranchi where he worked for the Daily newspaper called Ranchi Express. During this time he also wrote drama and songs for Ranchi Angel Theatres. Later on his dramas were played in Agra, Delhi, Bokaro, Ludhiyana and Mumbai by the Malayalam samajam and associations. In 1975, his first ‘Kalayum Kalavum’ was published by Ranchi Malayalaee Association Magazine called malayalee. In 1985, Kottayam Vidhyarthi Mithram published his first musical drama "Kadalkara". He wrote his second musical drama "Kadalinakkare Embassy School" which was the first Malayalam drama from the Gulf countries. His recent English novel is called Malabar Aflame and was released in the British Parliament. He publishes Pravasi Malayalam Magazine from London and acts as Associate Editor, Editor and representative of various publications. During the London Olympics 2012, he reported London Diary for Madhyamam Malayalam newspaper from London. He has also been the Chairman of World Malayali Council for the Middle East and African regions and he was the Literature section Convenor and Chief Editor of Jawala magazine for the biggest organization in UK called UUKMA. Now Karoor is the President of London International Malayalam Authors (LIMA). Karoor Soman has endeared himself to the Keralites in the fascinating world of Malayalam and English Literature.
Wife – Omana Daniel Childrens-Rajeev, Simmy and Sibin

Be the first one to write a review for the book MALABAR AFLAME by Karoor Soman.

Chance and the World
Gopal Srinivasan