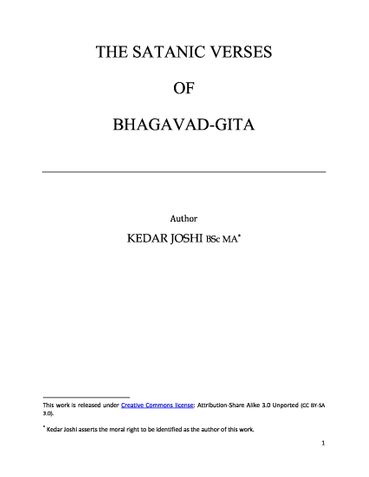 The Satanic Verses of Bhagavad-gita (eBook)

This work mainly presents a hardcore moral criticism of the Bhagavad-gita, the criticism that the Gita in fact implies that

1. Krishna—the preacher of yoga—is not in the least a yogi himself,

2. Krishna alone is satanic (or evil), and

3. Krishna—for reasons other than the ones for which he is considered evil—is nothing short of a terrorist and the Gita is Hindu terrorism.

And, as a matter of necessity, it attempts to systematically dig into the Gita's metaphysical foundations, further examining the gravity of each criticism through monistic and dualistic metaphysical interpretations (or perspectives).

Finally, as a matter of example, it also cites some of the verses of the Quran that appear similar in meaning to the Gita’s satanic verses, thereby drawing parallels between the two seemingly antithetical religious texts. The work thus points out that although the Gita may not seem to be as directly and explicitly terroristic as the Quran, terrorism—the one against unbelievers, for instance—is equally inherent in the Gita and the Gita can be fairly interpreted as a book of terrorism.

The Satanic Verses of Bhagavad-gita

Be the first one to write a review for the book The Satanic Verses of Bhagavad-gita.