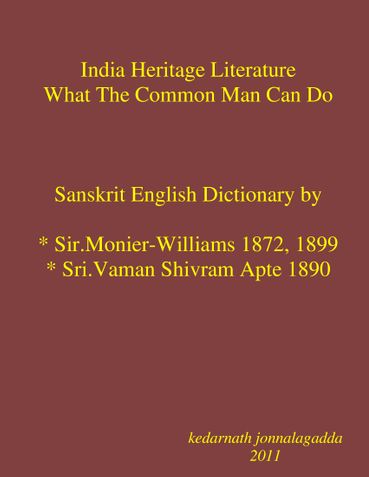 India Heritage Literature What The Common Man Can Do (eBook)

This book describes possibilities to derive more than just meanings from Monier Williams Sanskrit English Dictionary. V,S, Apte's Dictionary is yet another ocean which the author plans to work on, if nobody else dares before him. Monier Williams Sanskrit English Dictionary helps to know, catalog and assist preservation of heritage literature of India. The Dictionary cites more than 500 ancient works and authors for usage of words. And has reference to more than 6000 other works on a variety of subjects.

Abbreviations such as arithm. for arithmetic, alg. for algebra, anat. for anatomy, astron for astronomy, astrol. for astrology, geom for geometry, math. for mathematics, medic for medicine and so on are used in the dictionary to indicate context in using words. With home computer facility, anybody can prepare working subsets such as Dictionaries for Arithmetic, Algebra or Archeo-Astronomy, Medicine,etc. Anybody can have Dictionary subsets for the different [veda], [purANa], [rAmAyaNa], [mahAbhAratha], [purANa], etc. And also for specific works and authors such as [sUrya siddhAnta], [bhAskara], [varahamihira], [caraka], [shushruta] and [pANiNi]. Sanskrit and Latin scientific names of a large number of plants and animals are also given in dictionary. An idea of the vocabulary and usage of words in different periods by the authors is research topic in itself.

The Monier-Williams Sanskrit English Dictionary is very useful in studying and understanding original Sanskrit texts. And also to know where, why and how mistakes in translations creep in. In pursuit of knowledge there is tendency to depend on discourses, "commentaries", "guides" and "made easy" literature. Nobody seems to be reading text books any more. While, I do not belittle the scholarly people that prepare commentaries etc. I believe, there is is no excuse for not reading the original. In my opinion this is like mastering libraries of books on the art and science of swimming without getting into water yourself. Most glaring is the quoting of the veda by brilliant scholars. Nobody quotes who the author was! Who was the Rishi that said that is shrouded in mystery. Monier-Williams has a few mentions on this. How evolved we are today is as fundamental to progress as what and who contributed to this evolution. Heritage is as much about identity of authors as are artifacts and works they leave behind.

Using Internet, the author chanced into the world of India Heritage Literature, Sanskrit and other languages. That was 15 years back. Most of web sites were overseas! They probably still are! He jokes as consultant and businessman, he knows "How to do" but doesn't know "What to do", "His specialization is generalization". And "He wants to know what the other guy has , it doesn't matter if he does not know what he himself has". Strangely, in this book and other books he is writing he seems to know "What to do" and "How to do". He appears confident his readers will too.

India Heritage Literature What The Common Man Can Do

Be the first one to write a review for the book India Heritage Literature What The Common Man Can Do.

My Trip to the Fair - A Journey ...
Mallika Appana

Accounting for People Who Think They Hate Accounting
Anurag Singal