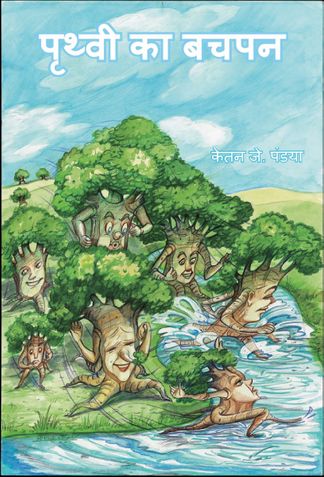 Respecting the wishes of Narayan, the sage Blespa and his family, accompanied by his disciples had arrived on Earth from the Divya Star to enable primeval man to have knowledge.
The primeval man is likely to move away from the nature in future. Unhappy with this, the child pupils of Blespa had no interest to learn more about the Man. Only four of the students accompanied Blespa to see the pre-historic man in the forest.
The same four students go to listen to a legend narrated by a speaking tree called Bhabha. Bhabha narrates to them an exciting and inconceivable story about Narayan’s sons Omarya and Anant, the infancy of the Earth and other planets.
According to the legend narrated by Bhabha, Omarya created the Earth and other planets and implanted element of life in them. Omarya also created water, air, mountain-peaks, streams and rivers on the Earth, and instilled within them life substance. All of them were able to speak and move about. They had within them a sense of feelings, pain and sensitivity.
Younger son of Narayan, Anant always used to act in haste. On the Divya Star, without seeking anyone’s permission, he went into the Future and created hindrance in the work of the God of Death. Therefore, Anant was sent back home.
At home, Anant played great mischief and pranks with dinosaurs in the workshop of Omarya, and had a thrilling experience of the Black Hole. Anant always missed his mother, Maadevi, but Anant could never know the reason of Maadevi’s absence from anybody.

On the way back to the School of Knowledge, he meets new friends, who reveal a lot about the modern man.
In the Universe, a monster called Hojimoto built up a great army of the planets of Torozoms Group through his wicked power and declared the first war of the Universe against Narayan.
Due to Maadevi’s pre-arrangements, Hojimoto was destroyed in the war. But in the last few moments, before his death, Hojimoto lunged a fatal blow on the Earth in which the race of the dinosaurs was destroyed.
Hojimoto came back to the Earth, which had become lush green and affluent. Omarya and Anant, who could protect the Earth earlier, also arrived on the Earth, and the first battle of the Earth was fought. Hojimoto was ultimately destroyed in the battle. Nevertheless, Hojimoto played last card up his sleeve – a last game to play with the future of the Earth.
All the elements of the Earth chose to remain silent. What was the reason for such a decision?

Be the first one to write a review for the book Prithvi Ka Bachapan.

How to Draw Comics
Bharath M.