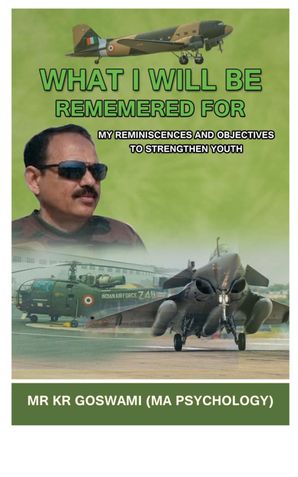 WHAT I WILL BE REMEMBERED FOR (eBook)

My reminiscences and objectives to strengthen youth

“Flying is a serious profession. Do not carry your worries beyond this point” We read daily the Slogan written on the door of hangar while taking out helicopter for flying. It was tense and grueling morning of winter when gliders Patiala aviation club took off and landed after shorter sorties. An aircraft took off from the launch pad with three technicians and two pilots but within 15 minutes of flying there was a blast and aircraft fell to the ground with fumes and fire. Within few minutes fire brigade, ambulance and other task forces arrived on the site but unfortunately no crews could be survived as aircraft had caught huge fire as the ATF (aviation turbine fuel) is highly inflammable. It was a regime all serviceable aircrafts were in the air to boost up the moral of soldiers. The unforgettable moments and relevant topics of this book is mainly for the youth and aspiring individuals who have patriotism in their blood. This is an attempt to bring out some of the resilient purpose hidden in their sight and mind by catching them young. This book is not only personal story of life style of military, it is also about vital solutions for the individuals from defence organizations and fulfil the zeal to serve the country in a better way as some of the extracts of my masters in psychology may be more constructive and creative in their lives. I started by journey as an author because some of my friends from Armed forces suggested me to write books so that I do not die loaded. I never wanted to write but recently read “Die Empty” of Tod Henry and decided to exhaust my inside story so that people can benefitted. Moreover I read more than 450 best seller books and wisdom of different authors which I have gathered should not go in vein. I have decided that 50% of the income generated from this book will be used for charity especially to the Armed forces personnel and other genuine victims of financial situations including physically challenged.

Author had 15 years of active service in Indian Air Force as an Airman. He worked on Aero Engines of various aircrafts equipped in Armed forces. He was working in the trade of Engine fitter and had a specialization in Helicopter engines. During his service in Air Force he was posted to different parts of the country including Leh-Ladakh as well as Jammu and Kashmir. He was a part of various operations of Armed Forces like Blue start operation, Blast Track operation and Passive air defence during peace time. He worked not only in Air Force Units but also rendered service in Army in units of Air Defence Regiments. Along with the Equipment and Aircrafts, he was also trained in Arms and ammunition like .303 rifles and LMGs. While working on the aircrafts he discharged the duties of Guard commander and preserved various security levels of Air Force at different units. As a senior non-commissioned officer, he also worked as a supervisor in canteen store departments and unit run canteens.
The author was also a manager in State Bank of India for 24 years in supervisory cadre. He discharged the duties of field officer, accounts officer and branch manager in various branches of Gujarat. He had maintained and upgraded various branches as well as run and met the requirements of levels aspired by Bank. During various line segment assignments, he managed men and material with moral boosting of workmen. He worked as a joint custodian of Reserve Bank of India for several years and maintained cash flow for ATM replenishments and Currency Administrative Cells of branches of SBI and other banks. He was awarded best branch manager of State Bank of India in the year 2014-15.
The author completed Masters in psychology in 1986 from one of the universities from South India. During his active service in Armed forces and corporate sector he guided organizations and individuals by the virtue of his experiments and experiences to resolve day to day issues. He acquired skills of computers by studying DISM and PGDCA from Saurastra University along with the degree from APTECH. While serving in the bank, he also imparted skills to students in spare time with morning and evening classes by teaching them MS office, C++, visual FoxPro, visual basics and website designing.
The author has a hobby of vocal and instrument playing like harmonium, guitar, flute, mouth organ and violin. Being an artist of All India Radio, he performed several programs over radio and stages in different parts of Gujarat. He mainly sang creations of Kabir, Mira, Brahmanand, Dasi Jivan, Ravi Saheb, Bhan saheb, Trikam saheb during his recordings and live programs.
Author is presently working on varieties of niches in the form of books and videos on banking, meditation, motivation, music and varied topics on personality traits and attitudinal effects on behaviour exploring human psychology.
Contact author:
Website address:
www.krgoswami.com
Email address:
krgoswami@krgoswami.com

WHAT I WILL BE REMEMBERED FOR

Be the first one to write a review for the book WHAT I WILL BE REMEMBERED FOR.

Packing Up Without Looking Back
Mauktik Kulkarni