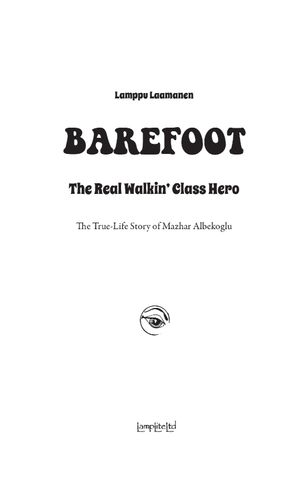 HE WALKED BAREFOOT FROM GREECE TO INDIA...

”I think this is the most incredible true-life story ever told.” – Pia Fragaki

Barefoot – The Real Walkin' Class Hero is a mind-blowing and brutally honest true-life story of Mazhar Albekoglu.
Q: Why the title ”Barefoot – The Real Walkin' Class Hero”?
A: Turkish Mazhar Albekoglu walked with a Swedish passport from Athens, Greece to India in 1978.
Barefoot.
He was born in Ankara in 1950 as the beloved son of a Chechen father and a Greco-Romanian mother. He runs away from home at fourteen and ends up hitchhiking and walking as a penniless alcoholic and druggie hippie around Turkey, Europe, Iran, Afghanistan, Pakistan and India.
He lives as a monk in a Hare Krishna temple. He dwells in the bat-infested caves of the Acropolis and among the lepers in India.
He almost dies at the hands of a Greek with a dagger and a sabre touting Sikh in India. He is put in jail on Crete Island and does puppeteering in Nepal, performing for the later murdered Royal Children.
He looks after the gun of Pakistani leader Zulfikar Ali Bhutto’s lifeguard while the guard sleeps. He gets into car accidents and forges passports for himself.
He drinks too much and smokes loads of hashish in unlikely places like in the gallery of the Dalai Lama’s Palace in Northern India and with the outlaws in the Khyber Pass in Pakistan.
He falls unconscious countless times, rises and walks barefoot from Athens to India where there is a new twist in his tale...
He settles permanently in Finland in 1987. His wife Tarja is a priest. Their first child is born in 1980 in Helsinki, Finland, the second one in Goa, India. The third child (plus Matthew) is born in Kathmandu, Nepal, the fourth in New Delhi and the fifth in Helsinki in 1988.
He establishes the multicultural Punky Reggae Party with his Indian friend Ram in Helsinki in 1989. Ram travels to Chennai, India in 2006 to meet his old mother after many years and dies from a heart attack.
”That’s Karma”, as Ram used to say.
Mazhar Albekoglu was rewarded the Art Prize of Uusimaa Finland in 2004 for his career in puppeteering. He became a Grandfather for the first time the same year.

Lamppu Laamanen is a Finnish author, his publisher in Finland WSOY-Bonnier is the biggest in Scandinavia.
Laamanen has spent a lot of time in India since 1997. He has been all over great India, from Manali to Kanyakumari. He has written many of his books in Goa.
Barefoot – The Real Walkin’ Class Hero is about his friend Mazhar.

Be the first one to write a review for the book Barefoot.

The Lost Treasures Of the Gold Mines
Rathna Moses Meriga