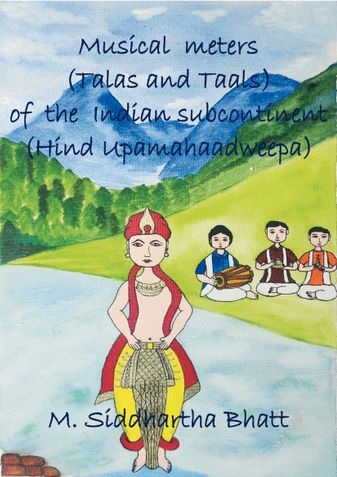 Talas of the Indian subcontinent.

The thrust of this book (1350 pages) is the coverage of musical meters used in the predominating classical (shastriya) musical systems (Hindustani and Karnatic) as well as non-classical (ashastriya) and folk systems ( loka and desi talas). The sheer expanse of geographic coverage {from Nepal and Ladakh (UT) to Sri Lanka} and time span (2nd century CE to present day) is quite gigantic. Efforts at attempting to capture the talas have resulted in marshalling of the structures of:

Two critical metrical structures, historically ignored in the repertoire of the evolutionary tala system have been highlighted. One, chaturbhaaga of drutha with an assigned value of ½ a beat though not given the formal status of a tala anga, yet nevertheless quite rampantly popular in folk musical systems of the Indian sub-continent (deployed as Ti Ti Tai talas). The other anga not accorded a formal status in the Indian metrical component hierarchy is the 1½ beat chapu- the Antara drutha {as it is located in-between the anudrutha (single beat) and drutha (two beats)} or traipada drutha, which is highly popular in Karnatic and Southern folk musical systems.
The book is divided into 12 Chapters with a glossary and data bases of talas arranged alphabetically, numerically according to the matra size and numerically as per their anga size.

M Siddhartha Bhatt (b. 1956) hails from Mangalore and settled in Bengaluru, has an extensive experience in art of mridanga and chende. He is one of the very few surviving students of Mridangam Maestro C K Aiyamani Iyer (1908-1976) of the Palghat stream of Karnatic percussion.

Be the first one to write a review for the book Musical meters (Talas and Taals) of the Indian subcontinent (Hind Upamahaadweepa).