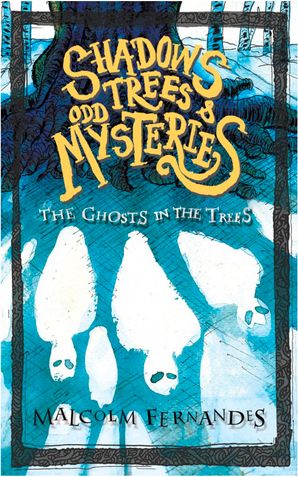 A Fantasy Mystery Series of Lore and Horrors

The Story:
When a DIABOLICAL village sage schemes to have the great old NAYNAB TREE in the south-west corner of the village CHOPPED down for personal gain, a DEFIANT young boy must find a way to save the tree . . . and maybe more!

. . . Inside a Story:
OSWALD TAJ, age ten, who everyone called ‘Oddy’, was a PECULIAR young boy — sorry, man (Oddy hated it when people called him a boy). Oddy thought he was too old for stories — at least regular ones. But Oddy loved BIZARRE tales of ADVENTURE, MYSTERY, and SCARE like the ones Grandpa told. Tonight was a perfect night for a SPOOKY tale. But little did Oddy know, TONIGHT was going to be different . . . because after this tale, things were NEVER going to be the same for him, again!

. . . Inside the Story:
​The NAYNAB have been around for millennia. Most people see them as regular trees. But some know that the NAYNAB hold many SECRETS. Fewer still know that the NAYNAB may very well be at the heart of the most TERRIFYING SECRET of them all — and of an age-old EVIL which will stop at nothing until it takes over the WORLD . . .


The stories of the SHADOWS, TREES & ODD MYSTERIES are as intertwined and knotted as the mysterious NAYNAB itself. The GHOST IN THE TREES is the first story in the series that follows the MYSTERIOUS myths, ODD occurrences and TERRIFYING tales that revolve around the little-known Naynab trees.

AN INTERVIEW WITH THE AUTHOR:

Q1: So, what are the Shadows, Trees & Odd Mysteries (STOM) books about?
A: The STOM series (previously called the Roots of the Naynab series) chronicles the perilous journeys of our heroes in their quest to find the significance of the Naynab trees. Making shocking discoveries along the way, they come face-to-face with evil men, strange creatures, supernatural beings and a dangerous fight for survival — not only of their own but indeed — of the entire world itself.

Q2: How should the books be read?
While each of the first three titles can be read as standalone books, the story-line in the STOM series is staggered into three narratives: One about a ten-year-old boy called ODDY and his GRANDPA in the story the Ghosts in the Trees, and another about three friends — ALAN, MAYA AND PHUDY, and their adventures in title the Madness Tree. Both these stories take place in the present time. The third story-line is different in that, it comprises of written accounts kept by a man — an explorer, called REM NAMDLIV, who discovered strange facts and the significance of the Naynab trees in the late eighteenth century.

All three story-lines are however connected and upcoming titles will reveal their convergence. Inspired by nature and the incredible world we live in, the STOM series is a fantasy mystery series (the author calls it, earth-fiction), with dashes of folklore, action and bone-chilling horror, that explore the mysteries of the Naynab. (Find out more at www.malcolmfernandesbooks.com)

Q3: Who are these books ideally for?
A: Though it might not be apparent by reading just one of the first three stories, I like to think of the overall tone of the STOM series as Indiana Jones meets Corpse Bride meets Lord of the Rings with multiple timelines and characters, that is for not just middle-graders and younger readers (8 and up) but anyone who likes family-friendly fantasy mixed with a ton of mystery and adventure.

Q4: How many books are there in the series?
A: There are 3 books in the series currently with more titles soon to come.

Q5: What can we expect from upcoming books in the series?
A: The series is going to get a lot more exciting with multiple plot lines and characters that will evolve, as well as plenty of new twists and surprises in store for readers. So, definitely look out for these upcoming releases and content.

To find out more, jump into the SHADOWS, TREES & ODD MYSTERIES experience online at www.malcolmfernandesbooks.com

Malcolm Fernandes was born in Manama, grew up in the city of Bombay and now lives in Bangalore, India. He has always loved stories of mystery, horror, science-fiction, and adventure. He is also obsessed with music, art, design and has spent the better part of the last thirty-nine years trying to learn the secrets of the creative realms.

His works are a mixture of lore, mystery, fantasy, and sci-fi, and are recommended for all who enjoy pulling plots, twisty twists, tumbling turns and underlying themes that speak to more of the profound in our world – than what first impressions allow. You can find out more about Malcolm at malcolmfernandesbooks.com and even join the author's readers group for more about the series.

Shadows, Trees & Odd Mysteries - The Ghosts in the Trees - Book 1

Be the first one to write a review for the book Shadows, Trees & Odd Mysteries - The Ghosts in the Trees - Book 1.

Other Books in Children, Mystery & Crime

Fruits of the world
Aayan

How To Knit A Dollhouse For Your Child
Sally White