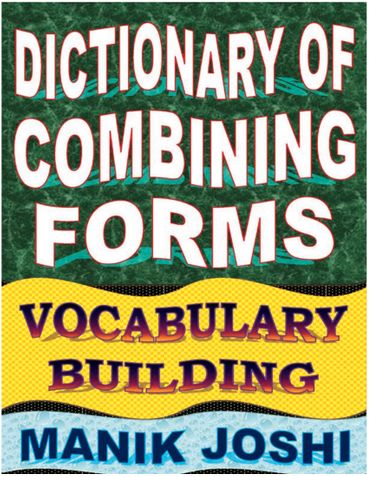 What are “Combining Forms”?

1. “Combining form” generally cannot stand alone as free words, but there are many exceptions to this rule.
EXAMPLES:
Combining Form: -like [free word]
lotus + -like = lotus-like
rope + -like = rope-like
-like- denotes: similar to the thing that is mentioned

2. Many Words ending in “-ed”, “-en”, etc. are used as COMBINING FORMS.
EXAMPLES:
Combining Form: -based (ending in ‘-ed’)
foreign + -based = foreign-based
demand + -based = demand-based
-based denotes: containing something as an important feature or part

3. Many words ending in “-ing” are used as COMBINING FORMS.
EXAMPLES:
Combining Form: -looking (ending in ‘-ing’)
fine + -looking = fine-looking
suspicious + -looking = suspicious-looking
-looking- denotes: to be appearing in a way that is mentioned

Alphabetical List of Combining Forms Along With Their Meanings And Examples

Be the first one to write a review for the book Dictionary of Combining Forms.

ROLE OF SCHOOL LIBRARY IN LEARNING PROCESS: A ...
Dr.Ashokan Kannarath