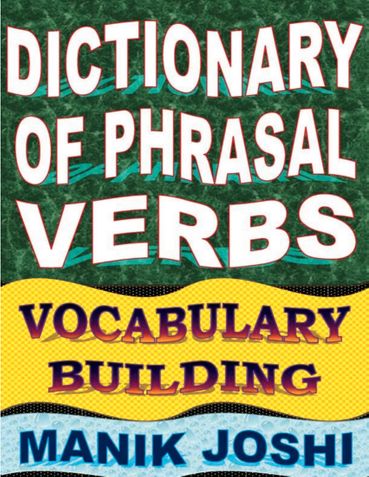 What are “Phrasal Verbs”?

A PHRASAL VERB is made up of a Verb and an Adverb or a Preposition or both.
Adverbs or prepositions which are used in Phrasal Verbs are called ‘Particles’.

Phrasal Verb with Usual meaning:
Verb and Particle keep their ordinary meaning
Example: turn around -- to turn around

Phrasal Verb with Idiomatic meaning:
Verb and Particle doesn’t keep their ordinary meaning
Example: turn down -- to reject an offer

Following is the detailed list of useful Phrasal Verbs and their meanings:

Abide
abide by -- to obey/follow a decision, rule, etc.

Abound
abound with/in -- to be full of

Accustom
accustom to -- to be familiar

Act
act on -- to affect
act out -- to express a feeling or an emotion in your behavior
act up -- to behave inappropriately
act upon -- to take an action on the basis of particular information, etc.; to execute

Agree
not agree with -- to dislike or disapprove

Aim
aim at -- to Intend to achieve a particular goal

Alight
alight on -- to find something by chance

Align
align with -- to support a person, rules, etc, openly or publicly because you agree with them

Allow
allow for -- to take something into consideration
allow of -- to make possible; to permit

Allude
allude to -- to refer to

Angle
angle for -- to try to get something indirectly by hinting

Answer
answer back -- to make counter-argument | to give rude reply to your senior, an authority, etc.
answer for -- to be responsible
answer to somebody for something -- to explain your decision or action

Appertain
appertain to -- to refer or relate

Arrive
arrive at -- to decide something after deliberation

Arrogate
arrogate to yourself -- to claim/take without having right

Attend
attend to -- to deal with somebody/something

Auction
auction off -- to sell something at an auction

Avail
avail yourself of -- to take advantage of an opportunity

Average
average out -- to make even; to calculate the average | to balance or equalize

Be the first one to write a review for the book Dictionary of Phrasal Verbs.