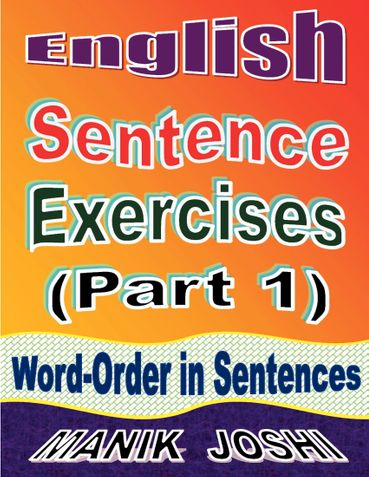 WRONG ORDER
01. ‘Gang war’ to a two-way gun led battle.
02. Bomb left scare in the city residents in panic.
03. Government today the opposition the for reached cooperation.
04. He bleeding in the developed lungs.
05. He police a plea for witnesses to contact issued the.
06. He to break free and managed raised an alarm.
07. He open to cut the managed steel vault.
08. He strongly of smelt alcohol.
09. He after hearing noises woke up from his sleep in the wee hours of Monday from another room in his house.
10. Heavy stormed police force the market area.

ANSWERS TO THE EXERCISE 1A (CORRECT WORD ORDER)
01. ‘Gang war’ led to a two-way gun battle.
02. Bomb scare in the city left residents in panic.
03. The government today reached the opposition for cooperation.
04. He developed bleeding in the lungs.
05. He issued a plea for witnesses to contact the police.
06. He managed to break free and raised an alarm.
07. He managed to cut open the steel vault.
08. He smelt strongly of alcohol.
09. He woke up from his sleep after hearing noises in the wee hours of Monday from another room in his house.
10. Heavy police force stormed the market area.

WRONG ORDER
11. His us to led bust arrest another racket.
12. His grew back hair.
13. Inspector detailed general discussions with held officials.
14. Them neighbor as quiet, religious and knew ‘normal’.
15. Police all three on the day arrested the case in the matter was brought to their notice.
16. Power officials $1 million in payments collected and fines.
17. The president media to a volley of questions replied by the persons.
18. She stop her lip to bit herself crying.
19. She wearing from the plane the printed descended dress, teamed with a matching coat and black pumps.
20. She window him to a tied with a nylon cord.

ANSWERS TO THE EXERCISE 1B (CORRECT WORD ORDER)
11. His arrest led us to bust another racket.
12. His hair grew back.
13. Inspector general held detailed discussions with officials.
14. Neighbor knew them as quiet, religious and ‘normal’.
15. Police arrested all three on the day the case in the matter was brought to their notice.
16. Power officials collected $1 million in payments and fines.
17. The president replied to a volley of questions by the media persons.
18. She bit her lip to stop herself crying.
19. She descended from the plane wearing the printed dress, teamed with a matching coat and black pumps.
20. She tied him to a window with a nylon cord.

Be the first one to write a review for the book English Sentence Exercises: Word-Order In Sentences.

What God Whispered in My Ears?
Sania Shaikh