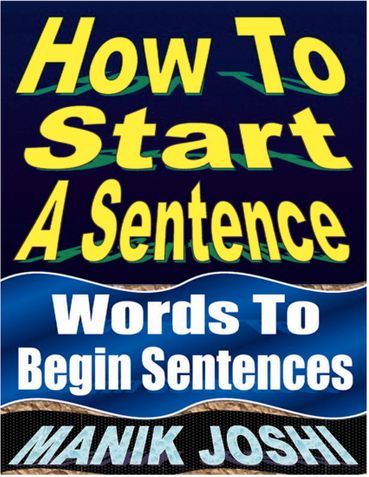 How to Start a Sentence (eBook)

How to Start a Sentence
Using ‘AS’
Using ‘AFTER’ and ‘BEFORE’
Using ‘AT’
Using ‘BY’
Using ‘FOR/FROM
Using ‘IF’
Using ‘OF/ON/OUT’
Using ‘TO’
Using ‘IN’
Using ‘WITH’
Using ‘WH-WORDS’
‘Asking Questions’
Using ‘VERB WORD’
Using ‘ING’ FORM of VERBS
Using ‘PAST PARTICIPLES’
Using ‘-LY Words’
Using ‘PRONOUNS’
Transitional Expressions
Miscellaneous
Exercises: 1(A) and 1(B)
Exercises: 2(A) and 2(B)

Important Note:
Starting a sentence with ‘and’ or ‘but’ is correct or not!

Note: It is said that a sentence should not be begun with a conjunction of any kind, especially one of the FANBOYS (for, and, nor, but, or, yet, so). But this is not a hard and fast rule. Particularly in spoken English, starting a sentence with ‘And’ or ‘But’ is common.

01. AS (used in place of ‘when’; while something else is happening)
As a person ages, his body weakens physically.
As another year draws to a close, our attention turns to a new year.
As news of PM's hospitalization spread, fans and admirers began lining up outside the hospital.
As the summer season approaches, I look forward to eating ice-creams.
As the day progressed, over a hundred protestors gathered at the office.
As the situation in the town worsened, jittery people rushed back to their homes.
As the train pulled into the station, passengers rushed towards it.
As the war widened, they had to leave the city.
As we grow older, we are more in control of our lives.
As we progress, it is going to become more and more difficult.

02. AS (used in place of ‘because’)
As a policeman myself, I am aware of all the laws.
As he got busy, his wife picked up the son.
As sanitary workers are absent on most of the days, sweeping of roads is also irregular resulting in the trash along the road.
As the electric cables are hanging loosely, it may anytime lead to a major accident if any passer-by comes into contact.
As the night temperature rose owing to the cloudy sky, there was some respite from cold conditions.

03. AS (used in place of ‘like’)
As a great poet, he played with words.
As in the past, the party president distanced herself from the government’s unpopular decision.

04. AS (used to introduce two events happening at the same time)
As the bus was nearing, he moved aside.
As the forces were conducting searches, the militants fired upon them, triggering an encounter.
As the mercury levels are dropping each day, difficulties for the poor are constantly rising.

05. AS (used to add information)
As you know, I have sent him a letter.

06. AS (used to show ‘in the way’)
As an interim arrangement, he directed the authorities not to return the land.
As part of the deal, they will hand over control of five towns.
As penance, he vowed to never scold any kid ever again.

POPULAR IDIOMS AND PHRASES WITH “AS”:

AS AGAINST SOMETHING (meaning: in comparison or contrast with something) --
As against last time four days, the fair will last for five days this year.
As against the estimated revenues of dollar 400 million for April, only dollar 100 million had been received during the month.

AS AND WHEN (meaning: at the time when (used to refer to an uncertain future event)) --
As and when I get a chance to settle into my retired life, I will think about things to do.

AS EARLY AS (meaning: done before the expected, usual or planned time) --
As early as 5 a.m. on Sunday, she was surprised to see the milkman.

AS FAR AS (meaning: facts or an opinion about a particular aspect of something) --
As far as we can know right now, we are sticking to everything as planned.

AS FOR SOMEBODY/SOMETHING (meaning: with regard to; used to start talking about somebody/something)
As for children between the age of 6 and 12 years, a fee of dollar 1 needs to be paid to enter the zoo.
As for David, he is doing fine.
As for the difficulty in searching for honest people, it is not such a big task.

Manik Joshi was born on January 26, 1979, at Ranikhet, a picturesque town in the Kumaon region of the Indian state of Uttarakhand. He is a permanent resident of the Sheeshmahal area of Kathgodam located in the city of Haldwani in the Kumaon region of Uttarakhand in India. He completed his schooling in four different schools. He is a science graduate in the ZBC – zoology, botany, and chemistry – subjects. He is also an MBA with a specialization in marketing. Additionally, he holds diplomas in “computer applications”, “multimedia and web-designing”, and “computer hardware and networking”. During his schooldays, he wanted to enter the field of medical science; however, after graduation, he shifted his focus to the field of management. After obtaining his MBA, he enrolled in a computer education center; he became so fascinated with working on the computer that he decided to develop his career in this field. Over the following years, he worked at some computer-related full-time jobs. Following that, he became interested in Internet Marketing, particularly in domaining (business of buying and selling domain names), web design (creating websites), and various other online jobs. However, later he shifted his focus solely to self-publishing. Manik is a nature-lover. He has always been fascinated by overcast skies. He is passionate about traveling and enjoys solo travel most of the time rather than traveling in groups. He is actually quite a loner who prefers to do his own thing. He likes to listen to music, particularly when he is working on the computer. Reading and writing are definitely his favorite pastimes, but he has no interest in sports. Manik has always dreamed of a prosperous life and prefers to live a life of luxury. He has a keen interest in politics because he believes it is politics that decides everything else. He feels a sense of gratification sharing his experiences and knowledge with the outside world. However, he is an introvert by nature and thus gives prominence to only a few people in his personal life. He is not a spiritual man, yet he actively seeks knowledge about the metaphysical world; he is particularly interested in learning about life beyond death. In addition to writing academic/informational text and fictional content, he also maintains a personal diary. He has always had a desire to stand out from the crowd. He does not believe in treading the beaten path and avoids copying someone else’s path to success. Two things he always refrains from are smoking and drinking; he is a teetotaler and very health-conscious. He usually wakes up before the sun rises. He starts his morning with meditation and exercise. Fitness is an integral and indispensable part of his life. He gets energized by solving complex problems. He loves himself the way he is and he loves the way he looks. He doesn’t believe in following fashion trends. He dresses according to what suits him and what he is comfortable in. He believes in taking calculated risks. His philosophy is to expect the best but prepare for the worst. According to him, you can’t succeed if you are unwilling to fail. For Manik, life is about learning from mistakes and figuring out how to move forward.

How to Start a Sentence

Be the first one to write a review for the book How to Start a Sentence.