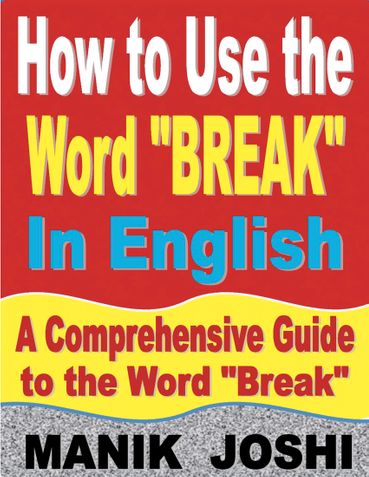 Break is an irregular verb. Its three forms are as follows:

MOST COMMON Meanings OF “BREAK” AS The MAIN VERB ARE AS FOLLOWS:

Meaning 1:
to be damaged and divided or separated into two or more parts due to force of some type; to damage sth in this way

Example Sentences:
Many large trees broke under the weight of heavy snow.
(break (in/into sth)) A passenger plane skidded off the runway and broke into pieces
(break sth) At the age of 15, Day broke her legs in a car accident.
A museum visitor intentionally broke a vase in the exhibition.
(break sth in/into sth) He broke the table into many pieces and wood splinters flew up into the air.

Meaning 2:
(break sth) to do sth that is considered illegal or to fail to keep your promise, words, etc.

Example Sentences:
When minors break the law, they usually appear in juvenile court.
Why do some employees break the rules?
With their permission, you can break the agreement
I had no other option but to break the contract with them
What can you do when you break a promise to yourself?
He broke the speed limit 15 times in four hours and was fined heftily.

Meaning 4:
to destroy sth or make sb/sth weaker or unable to bear sth; to become weak or be destroyed

Example Sentences:
(break sb/sth)
A loss would have definitely broken his morale.
His battle with debilitating medical conditions never broke his resolve to struggle to maintain a productive life.
The first time we confronted them; they broke our momentum and broke our spirit.
He broke her by his harsh words.
Racism broke her. (destroyed his confidence)

(break under)
The prisoner broke under questioning and confessed that he stole the money.
He broke under pressure and lost the game.

Example Sentence:
After he left college, he broke all ties with his former life.