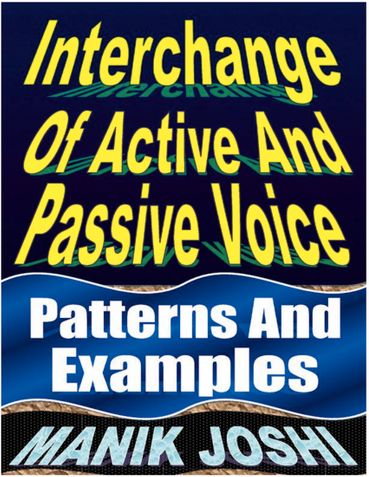 VOICE - Definition
Voice refers to the form of a verb that shows whether the subject of a sentence performs the action or is affected by it.

ACTIVE VOICE - Definition
The form of a verb in which the subject is the person or thing that performs the action.
Example:
They finished the work.
[subject -- “they”, verb -- “finished”, object -- “work”]
In this sentence, the subject (they) acts on the object (work).

Other Examples:
The teacher praises him.
She posted the letter.
I buy new books.
We will celebrate his birthday.

PASSIVE VOICE - Definition
The form of a verb in which the subject is affected by the action of the verb.
Important Note -- The object of the active voice becomes the subject in the passive voice.
Example:
The work was finished by them.
[subject -- “work”, passive verb -- “was finished”, object -- “them”]
In this example, the subject (work) is not the doer; it is being acted upon by the doer ‘them’)

Other Examples:
He is praised by the teacher.
The letter was posted by her
New books are bought by me.
His birthday will be celebrated by us.

Rule 2:
Passive voice needs a helping verb to express the action. Put the helping verb in the same tense as the original active sentence. The main verb of the active voice is always changed into past participle (third form of the verb) in different ways.

Rule 3:
Place the active sentence's subject into a phrase beginning with the preposition ‘by’.

Rule 6:
When there are two objects (direct object and indirect object), only one object is interchanged. The second object remains unchanged.

Interchange of Active and Passive Voice

Be the first one to write a review for the book Interchange of Active and Passive Voice.