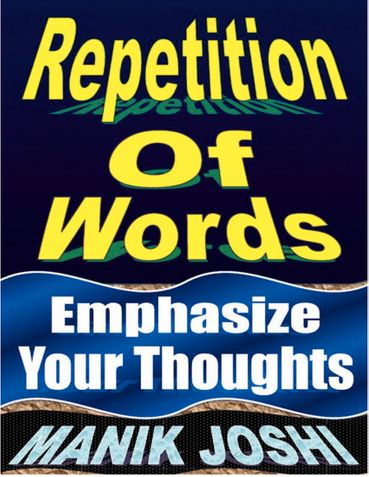 What is “Repetition of Words”?

Repetition in the English Language is the repeating of a word, within a sentence in order to PROVIDE EMPHASIS. ‘Repetition of words’ could be classified into many groups based on the placement of the words in a sentence. Different terms have been devised to denote different kinds of repetitions. Some of these terms are as follows: Adnominatio, Conduplicatio, Diacope, Epistrophe, Mesodiplosis, Palilogia, Polyptoton, Symploce, etc.

Not going into the details of these ‘hard-to-pronounce’ terms, I have covered only the most popular patterns of ‘Repetition of words’ in this book.

This pattern is generally used to show ‘continuation or repetition of an activity, or ‘presence of many things or people of the same kind’.

1. -- She asked and asked about the money.
2a. -- Stars, planets, and galaxies emerged and evolved billions and billions of years ago.
2b. -- They have got billions and billions of dollars lying around in vaults.
3. -- There has been campaign and campaign against us for a very long time.
4. -- Wastage of water must be discouraged and discouraged.
5. -- Workers dug and dug the road.
6. -- We have eras and eras coming.
7. -- He called after her, “Where are you going?” She went further and further.
8a. -- His confidence grew and grew.
8b. -- Once he started telling family about his challenge, the support just grew and grew.
9a. -- ‘How long did the match last?’ ‘Oh, hours and hours’
9b. -- Oats are a complex carbohydrate which means they will fuel your body for hours and hours.
10. -- Merit and merit alone can be criteria.
11. -- The road went on for miles and miles.
12. -- My travel plan was mired and mired in utter confusion.
13. -- He has nurtured and nurtured his reputation as a master tactician.
14. -- They played and played cards all night.

(B). ‘By and by’
[meaning -- after a short period; before long; soon | eventually]
By and by you will make your deficiency.
The hours just kept on going by and by.

(C). ‘Half and half’
[meaning -- in equal parts]
We are lucky that it is affordable rent, and sharing half and half helps

(E). ‘More and more’
[meaning -- continuing to become larger in amount or number]
You always ask for more and more.
More and more girls are giving priority to their careers.

Be the first one to write a review for the book Repetition of Words.