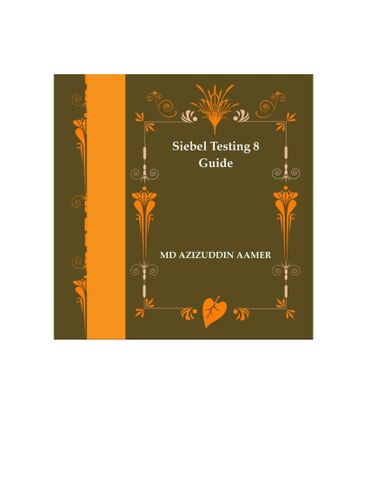 This book covers Component , Product , Operating Testing with respect to Siebel. It also covers the Testing life cycle. It covers both White Box as well as Black Box Testing. This also covers Unit Testing ( UT ) , Integration Testing (IT ) as well User Acceptance Testing ( UAT ).It covers entry and exit criteria for all testing covered as well as the deliverables.

It has a Sample full Regression Siebel Test plan. It has a comprehensive Glossary of Testing Terms & Terminology. It also covers Siebel Testing Best Practices.

• It covers the following new features in the Siebel 8.0 UI

He got 8 + Years of Siebel CRM Experience. He has worked on all versions of Siebel ranging from Siebel 5.5 to Siebel 8.1.

Be the first one to write a review for the book Siebel Testing 8 Guide.

Another number game in Jquery and HTML - ...
Shubhankar Paul