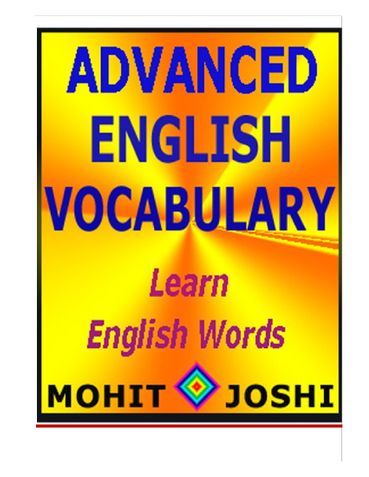 THIS BOOK CONTAINS MEANINGS OF MORE THAN 1400 ADVANCED ENGLISH WORDS (including phrasal verbs and idioms).

abstemious not allowing yourself to have much food or alcohol or enjoyable activities
austere without any decorations; (of a person) strict and serious; abstemious

ad-lib to give a speech or a performance without preparation or practice
improvise to make or do sth using whatever is available, to ad-lib

Mohit Joshi, The Author Of This Book Is Graduate In 'Electronics And Communication Engineering' & Is GATE (Graduate Aptitude Test In Engineering) Qualified. He Is Particularly Interested In Cosmology & High Energy Physics. Albert Einstein & Richard Feynman Are His Favourite Nobel Laureates.
MohitJoshi.com Is the Personal Website of The Author.

Be the first one to write a review for the book Advanced English Vocabulary.