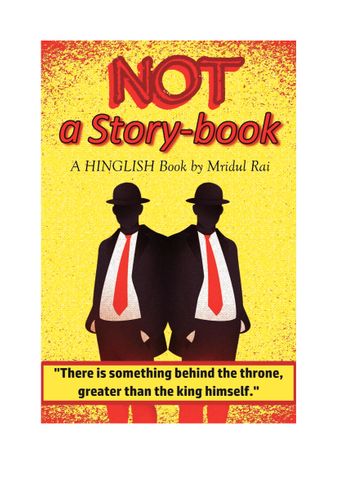 NOT a Story-Book (eBook)

A Guide to Total Independence

"When a fox hears a rabbit scream, he comes running. But not to help."

Do you know that less than 1% of the world’s population owns more than 40% of the world’s wealth? And what do we own?
We own a life full of doing whatever we HAVE to do instead doing of what we WANT to do so we can feed our family and keep the roof above our heads. We elect politicians and create governments and believe that they are going to make the world better. But we fail to notice that our world does not depend on them, our world depends on money. And consequently, on the rich.
Our educational system trains us to be slaves. Fixed timings, fixed classes, fixed syllabus, fixed subjects, fixed uniforms are all ways of psychological conditioning meant to train us to live by fixed rules without asking questions. Memorizing without understanding is encouraged by the grading system. School is an institution whose aim should be to create well informed logical inquisitive individuals. Instead, it aims to create disciplined obedient workers that are smart enough to do their jobs well but aren’t smart enough to question the logic behind having to work for 40-45 years in exchange for food, shelter and paper currency and STILL believe that they live independent lives.
We aren’t free to choose neutral media for news. All news channels are bought off and paid for. We aren’t free to choose honest hard-working politicians. All of them are corrupt. We aren’t free to choose what to wear or what to eat or where to travel. It all depends on what we can afford!
Abundant sources of energy like solar energy, wind energy, geo-thermal energy, hydro-energy are ignored so we have no choice but to continue paying for petrol/diesel and household electricity so the rich can get richer and the climate can get worse. Methane emissions, carbon-dioxide emissions, ozone depletion, global warming; we are on a journey towards complete annihilation. And still, we choose to remain willfully ignorant.
We cannot see that this is NOT the 21st Century we deserve but it is the 21st Century that has been imposed on us!
I am here to tell you something that you never thought you’d hear:
You can EASILY afford the lifestyle of the super rich.
And no, I am not going to give you affirmations or chants or magical mantras for overnight success, all those are hokum and this is not that kind of a book. This is the kind of book that will give you the knowledge you deserve to possess but don't have access to because nobody talks about it.

Mridul Rai is a B.Com graduate and a Certified Financial Planner with 8 years of experience in finance, goal-based life planning and personal insurance and investment. He is also a trader in the Indian stock market and is well-versed on how world economy works.
Always knowledge-hungry, he spends most of his free time reading or watching documentaries.
Presently he is working on building a website called realfreedom.in where he will share unconventional yet significant knowledge in his blogs and videos.

Be the first one to write a review for the book NOT a Story-Book.

Other Books in Self-Improvement, Sapiential Novel