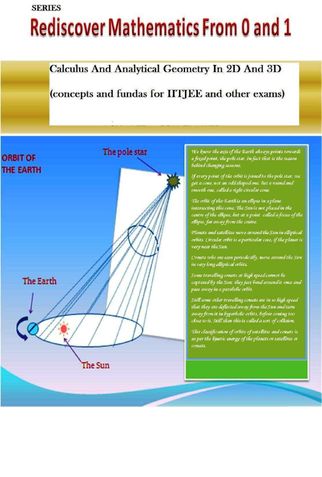 Calculus And Analytical Geometry In 2D And 3D (eBook)

fundas for IITJEE and other entrance exams

The book attempts to explain the topics in terms of "identity","division" and "symmetry" so that Mathematics becomes a passion with the student instead of burden. The topics include Calculus - set theory, logic, Boolean algebra,relations,functions, continuity, limit, differentiation, applicationss thereof to maxima, minima, intermediate value theorems, Taylors, Theorem, de Moivre's theorem, tangents, normals, curvature, asymptotes, envelopes, with particular reference to conic section. The topics include vectors, determinants , matrices, analytical geometry of straight lines in plane and in 3D space, conic sections as really sections of cone, meanings of eccentricity, conic sections as circles under compression of coordinates, tangents, normals, asymptotes, curvature, differential calculus, integral calculus, indefinite and definite integrals, summation of series, calculations of electric fields, potentials, inductances, moments of inertia, centre of gravity, differential equations as codes of nature like seed to trees, introduction to differential equations through simple harmonic motion, projectile motion, planetary motion, rotational motion and mechanics, combining all central forces . The topics cover the curriculums of CBSE, ICSE and other state councils in +2 level, and also contain fundamental concepts for IITJEE and other entrance examinations.The celebrated institutions teach advance modules for preparation of exams, but the foundations are elucidated in this book and the book shall occupy this space.

Calculus And Analytical Geometry In 2D And 3D

Be the first one to write a review for the book Calculus And Analytical Geometry In 2D And 3D.