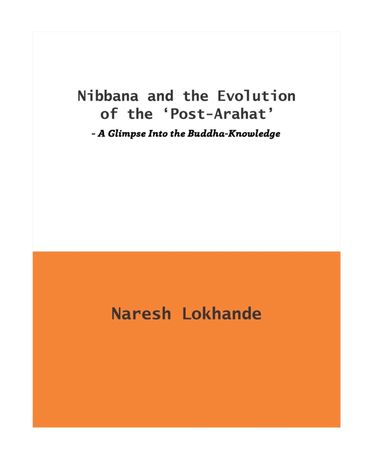 Nibbana and the Evolution of the 'Post-Arahat' (eBook)

A Glimpse Into the Buddha-Knowledge

The Buddha’s Enlightenment indicates his acquisition of the supreme knowledge, that is, knowledge of the nature and causes of our existence. This, the Buddha-knowledge, naturally forms the basis of the Buddha’s philosophy and of his solution to the problem of life. Without it, Buddhism cannot be fully understood. But it is strange that no attempt has been made till now to illuminate specifically the Buddha-knowledge; in fact, this subject has been so much neglected that it is not even on anybody’s mind. And we get only limited views of it in the books on Buddhism. A complete, coherent and intelligible description of the Buddha-knowledge is lacking. This slim book, then, is a humble attempt to fill that vacuum.

Naresh Lokhande is a former journalist, now a lawyer. He is the author of 'The Manasputra', a mystery novel which unravels the deep, insidious workings of the caste system. He resides in Nagpur.

Nibbana and the Evolution of the 'Post-Arahat'

Showing 1-4 out of 6
prashantphusate 2 years, 2 months ago

Nibbana and the Evolution of the 'Post-Arahat' Naresh Lokhande

A brilliant and rare exposition of the Buddha-Knowledge. A must-read for those who want to know the content of the Buddha's insights on the human condition.

This book offers pioneering insight into the supreme knowledge and philosophy of the Buddha. Highly recommended. But needs to be read slowly, carefully.
Awesome book writtten by Naresh
Parag

There are three strong points of this book. First, it’s been written out of recognition of the need for a clear exposition of the central core of Buddha’s philosophy, in an environment suffused with confusing variations. I have read numerous books on Buddhism, most of them containing more than 100 pages each. Yet I have never understood exactly what the Buddha is trying to tell us. I have understood it fully, for the first time, by reading this book. By sticking to the philosophical aspect alone, the author has succeeded in bringing out the central core. He has even avoided citations, quotations and metaphors, perhaps to keep us focussed on the philosophy.

Second, the author has explained regular Buddhist terms – such as Samsara, Nibbana, Kamma, rebirth, self, etc – from an altogether new perspective which, I am sure, will change our understanding of Buddha’s philosophy. So, Samsara is not actually the endless chain of birth and rebirth but an endless chain or sequence of ‘becomings’, and Nibbana is liberation from this chain of becomings. What is depicted in the Wheel of Life, according to the author, is the evolution of becomings, this evolution being led by the mind (feelings and desires). This is the first analysis of the Wheel of Life which I have found as making sense and as what the Buddha really wants to show as to how our present state of existence has come into being.

Dukkha is a fact of our present state of existence which is conditioned existence. In order to end Dukkha, the Buddha wants us to abandon this state and aspire for an unconditioned state of existence. What is this state? – This, the author says, is the state of the ‘Post-Arahat’ (based on ‘anupadisesa nibbanadhatu’). According to him, the ‘Post-Arahat’ is the ultimate goal of Buddha’s philosophy, and this goal is to be attained not individually but by the whole community of human beings, hence the establishment of the Sangha.

Frankly, I have never come across ‘Post-Arahat’ in Buddhist literature before. Nonetheless, it is an astonishing, revolutionary and believable reading of ‘anupadisesa nibbanadhatu’ made by the author. The ‘Post-Arahat’, I think, is the most beautiful goal ever set up by any religion/ philosophy for the aspiration of human beings, a goal that can be attained by unified human effort.

Third, the book has only 31 pages. I am glad I read it (and read it twice within a day). I am thrilled that I can now say with confidence that the Buddha was the world’s greatest philosopher and guide ever.

Excellent piece of writing, very concise and to the point.
The writer demonstrates a good knowledge about the subject. It is a well researched writing and brings out the main idea behind Buddhism.

It showcases the aspects of Buddhism which are mostly missed by common public in various Buddhist literature.

Full marks to the author for bringing out the gist of Buddhism in such simple and easy language.

Is Idol Worship Wrong in Hinduism by Swami ...
Swami Vivekananda