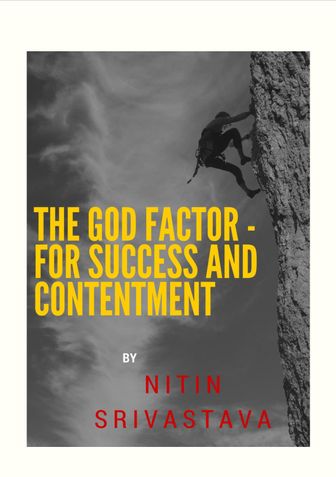 The God Factor - For Success and Contentment (eBook)

Excerpt -
I start with a story about a farmer. There was a farmer, always complaining, “Oh God! What are you doing, you make it rain when there is no need of it for the crops and you make sun shines at its peak, when crops require water and cloudy weather. What is this? You are God but not playing the role of God perfectly and in all this I am suffering, my family is suffering. But you are just watching. This is ridiculous. I am not earning the way I should and this is because of you. You never listen to my prayers and that is why my life is becoming a hopeless affair. But, what to do, you are also not listening. Oh God! You are worthless. You are nowhere.”
Praying daily like this one day he saw God, appeared in front of him, in the form of a light and asked him, “what can I do for you, to make you happy.”
Farmer asked to give him the authority to control the weather of his region, according to his will.
God said, “Okay! From now onwards you’ll be able to control the weather according to your will. You will be able to make it rain, when required and make the sun shines as per your requirement.”
The Godly light disappeared then.
Now the farmer was happy, thinking that the control is now in his hands. So, he became confident of getting a good crop.
Now was the time to harvest. He was happy since, the crop was looking quite good. After obtaining wheat grains from the crop he reached market to sell. But to his surprise, nobody was ready to give the right price for the grains. He asked many buyers but nobody was ready to purchase. Every buyer was rejecting. But, he himself also knew the reason.
The grains were somewhat not having the right growth as it should be.
The farmer was puzzled, he had done everything right. But, why the grains were not grown perfectly? Again he was on the same boat as was before, complaining to God, and said “you must have played some trick, otherwise how is this possible”.
He was sad, very sad.
The light appeared again and asked the reason for his sadness. The farmer explained the issue and asked explanation.

He is basically an engineer and working at the post of Asst. Professor in an engineering college. He has started writing as his hidden thirst, as he was interested in writing from the beginning but, not got the time before, because, he had decided to make a career in engineering. After achieving that career he decided to fulfill his thirst and started writing. ‘The God Factor – For Success and Contentment’ was his first book. He has interest in writing on the topic of spirituality and motivation. Spirituality is always his basic quest and that is why he is very much interested in spirituality. This book which he is writing is also basically concern with spirituality. Write at nitinsri982@rediffmail.com Hurry!!!! can get a free.

The God Factor - For Success and Contentment

Be the first one to write a review for the book The God Factor - For Success and Contentment.