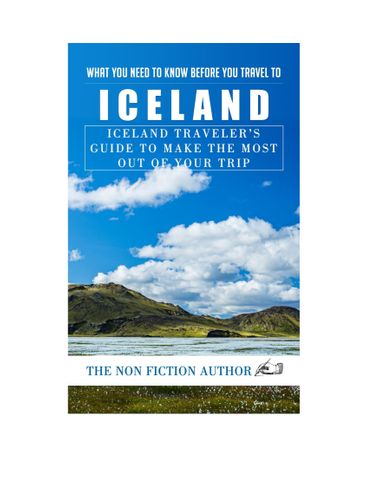 What You Need to Know Before You Travel to Iceland (eBook)

Despite its remote location Iceland still draws more than a million visitors every year, three times the population of the country. The magnetic power of Iceland to pull tourists from their homes to its shores is found deep below the surface where the raw planetary crust is slowly splitting apart along the Mid-Atlantic Ridge, the source of many mountains and earthquakes in Iceland. While there many geologically active volcanoes generally they are not continually spewing lava, though you could experience the explosive nature of the volatile earth during your visit if there has been a recent eruption, or you are lucky enough to be stranded in Iceland during one. There are numerous other attractions not involving molten lava, from waterfalls to fjords and the Icelandic cities and towns. The capital, Reykjavík, is on the southeastern coast of the country and is home to nearly a third of the population with an abundance of museums, bars, cafes and gift shops. Nearby to Reykjavík you can go on a whale watching tour, second only to Húsavík in northern Iceland. You can (and should) make a day trip to see the highlights of the Golden Circle including drifting Þingvellir National Park, tremendous Gullfoss, and the explosive geysers. While Reykjavík may seem like a small, quiet metropolis, it is in fact the largest city in the country. Other small villages are scattered around mainly on the coast but in some places you can drive for hours without seeing another car or person.

What You'll Find Inside:
* Why You Will Fall for Iceland
* Tips
* Transport, Visas, Packing
* Geology, Nature, and History
* South and West: Reykjavík, Golden Circle, and Fjords
* North and East: Akureyri and Mývatn
* Tips and Tricks For an Unforgettable Visit
* Bonus! - Icelandic Words and Phrases You Must Absolutely Know

What You Need to Know Before You Travel to Iceland

Be the first one to write a review for the book What You Need to Know Before You Travel to Iceland.

Globetrotting with a Twist of Life
Arnab Mahanta

Europe for a bargain
Aditi Mukherjee