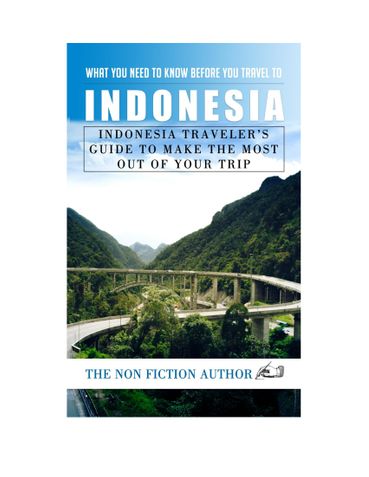 What You Need to Know Before You Travel to Indonesia (eBook)

Indonesia Traveler's Guide to Make The Most Out of Your Trip

Indonesia sits centrally on the equator and is surrounded by Malaysia, East Timor, Papua New Guinea, Singapore, the Philippines, Australia, Palau, Vietnam, Thailand, and India. A plethora of cultures have added to Indonesia's history, going back to Chinese and Indian traders in the 1st century AD. Marco Polo was the first European to land at Sumatra, and later in their search for the legendary Spice Islands, Portuguese and Spanish explorers also learned of Indonesia. Starting in the late 1500's, the Dutch held the islands for three centuries and the islands were commonly termed the Dutch East Indies. In 1945, the Indonesian people declared independence and they officially achieved statehood in 1950. In many ways a young and forward looking country, Indonesia embraces all of its diverse population and traditions under the banner of 'One Country, One Nation'.
Of Indonesia's multitude of islands, about 6,000 can be considered inhabited. The six main islands one is likely to visit are Sumatra, Java, Kalimantan (the Indonesian portion of the island of Borneo), Bali, Sulawesi (formerly Celebes), and Papua (the western half of New Guinea Island). We also include information in this guide for the Maluku island group (also called the Moluccas, the original spice islands) and the Nusa Tengarra Islands. While many vacationers, especially those with limited time, might concentrate on an area developed for tourism such as Java or Bali, one could easily spend a month or more and barely begin to discover some of Indonesia's hidden corners and remote treasures.

What You Need to Know Before You Travel to Indonesia

Be the first one to write a review for the book What You Need to Know Before You Travel to Indonesia.

Can You Take Me Higher?!
Ashwin Wilson