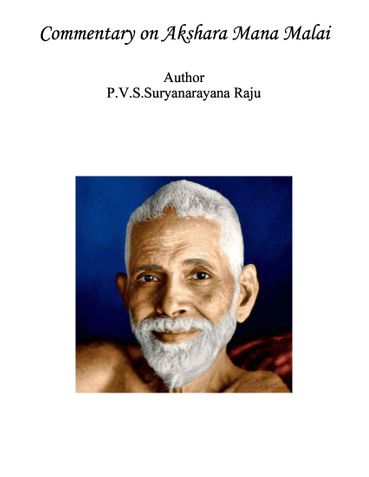 Ramana Maharshi is an exponent on Self-enquiry.He has great devotion and gratitude for Arunachala Siva. He said the holy hill of Arunachala is nothing but solid mass of bliss of Siva. The devotees of Ramana Maharshi used to go for begging food in Tiruvannamalai town and they asked Bhagawan to write poems for singing while begging so that people will recognise them as Ramana Maharshi devotees. Conceding to their request Bhagawan started writing verses, considering himself as bride to the bride groom Arunachala Siva in which out of love he
accuses Arunachala Siva for not fulfilling his spiritual expectations. This type of accusing out of love is called Ninda Stuti (Praising through accusing) which has got it's own poetic value. Bhagawan used to do Giri Pradakshina slowly and some verses spontaneously felt by him and he noted them on the paper. On the whole there are 108 verses; the number is auspicious in Hinduism. Akshara is a Sanskrit word which means indestructible letter, Mana in Tamil means marriage, Malai means garland. So the bride Ramana Maharshi prepared the indestructible garland of letters for the bride groom Arunachala Siva to place that garland around his neck during marriage and in turn expects garland of grace from Arunachala Siva. So Akshara Mana Malai means marital garland of letters put together by Ramana Maharshi.I will try to give the meaning of each of 108 verses according to my understanding and any improvements over it or suggestions are welcome. 108 numberhas significance. 9 Planets with their 12 rasis is equal to 108. Human has 27 stars with 4 limbs which constitute 108.The world is made up of 108 elements

Be the first one to write a review for the book Akshara Mana Malai.

Noble Use Of Money (In Punjabi)
Dada Bhagwan