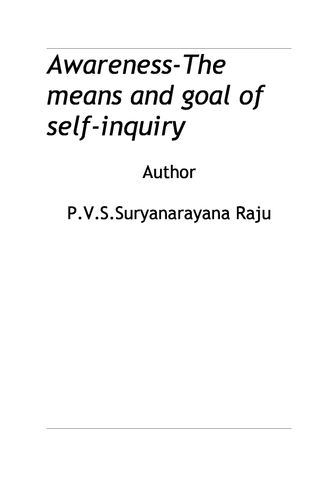 Ego is basically a wave of awareness arising from infinite consciousness. The wave is part of its source which is ocean of infinite awareness and so can never be separate from it. The ego wave arises out wind that has arisen between infinite awareness and the objective reality. So it is a bridge between consciousness and the world. Because it is a wave it is never static and exists for a limited period. The ego awareness is attracted by the objective reality and forgets the fact that it is a part of infinite awareness. This is called self ignorance which means that it knows that it exists but is ignorant of the fact that that it is one with the supreme reality. Watching, awareness is not something new to be introduced in your life. Out of habit you are watching only others. Only thing is that it has to be arr-owed towards your own inner feelings, thoughts, moods till watcher disappears and only watchfulness remains. This is the goal of self-inquiry.

Awareness-The means and goal of self-inquiry

Be the first one to write a review for the book Awareness-The means and goal of self-inquiry.

THE MYSTERY OF LIFE LOVE AND DEATH
MAA SUDESHI BUDDHA