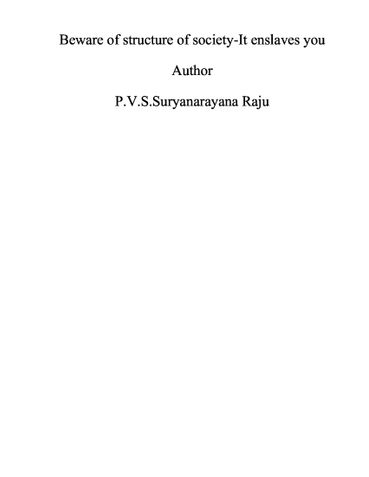 Beware of structure of society-It enslaves you (eBook)

The society is pleasure oriented, brutal, callous, highly corrupt flowing as a stream of misery in which we are knowingly or unknowingly caught.Every one wants to get out of that stream but they do not know how.There is seeming security in family, nation at physical level, religion at psychological level but that so called security is at the cost of individual freedom. The society molds the mind of individual through family, tradition, priest, politician, education in such a way that he adjusts himself to the corrupt ways of society. He is not allowed to be himself, he is not allowed to be natural but he is encouraged to be violent, competitive, ambitious and in this process takes away his individual freedom to be himself.If he asserts himself to be himself the whole society punishes him either directly or indirectly. It cripples the innate intelligence of every human being and make him ready to serve the vested interests of the establishment. Unless we are aware of this trap of society we are caught in its net of misery.In this book an attempt was made how to live in such society without being caught in its trap of miserable tradition.

Beware of structure of society-It enslaves you

Be the first one to write a review for the book Beware of structure of society-It enslaves you.

The theory and practice of self-inquiry.
P.V.S.SURYANARAYANA RAJU.

How to Cure Jinn ( Demonic ) Possession ...
A Patient of Sihr