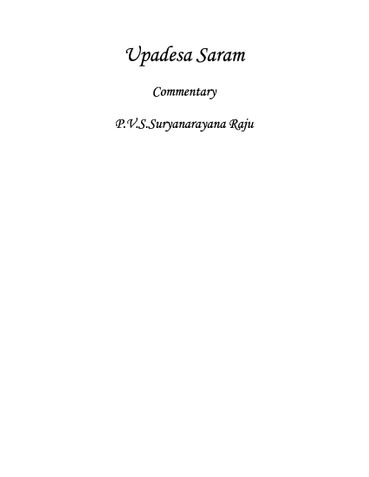 Upadesa is a Sanskrit word which literally means facilitating an entity to come back to its source, its home. Saram means the essence of such instruction towards that direction. The essential nature of mind is consciousness. But being covered by cloud of tendencies, past experiences, thoughts mind forgets that its nature is consciousness. This is called Self-forgetfulness.A mind that is in a state of Self-forgetfulness(Atma vismruti) leaves its source which is Self and identifies with non-Self adjuncts like the ego(Ahamkara, "I" thought),thinking process(manas)intellect(Buddhi),memory (chitta)the physical body and seeks happiness outside and in the process collects lot of misery because of conflict that is inherent in the dualistic phenomenal reality. After a break even point unable to bear this misery it starts inquiring into what is the cause of all this misery and starts investigating "who am I”,” what is my nature”,
” whence am i" etc. When mind uninterruptedly does this quest it existentially negates the five coverings(Pancha kosas) covering the consciousness i.e sheaths of body, vital airs(Prana)mind(manas,the thinking faculty),intellect(Buddhi, the discriminatory faculty, sheath of Self-ignorance(Anandamaya kosa)it remembers that its nature is pure conscious being. So in this way the process of bringing back the outgoing mind to its source is described in 30 Sanskrit slokas by Bhagawan Sri Ramana Maharshi which is named as Upadesa Saram by him. If his message in this properly understood it annihilates Self-ignorance and confers Self-Knowledge. Such Self-knowledge conferring books are called Darshana Grandhas in Sanskrit.Upadesa Saram is such a book. In this work the author Dr.P.V.S.Suryanarayana Raju commented on these 30 slokas of Bhagawan's Upadesa Saram.

Be the first one to write a review for the book Upadesa Saram.