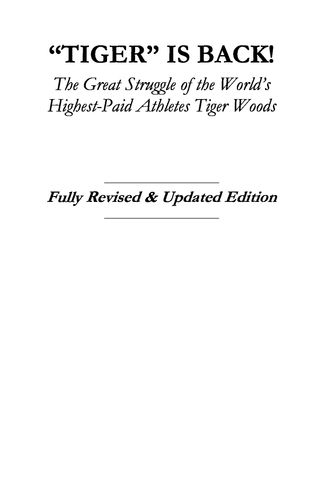 On October 31, 2010, Woods lost the world number one ranking to Lee Westwood. As of January 9, 2012, he is ranked #25. This is up from a low of #58 in early November. That was his lowest rank since October 19, 1996, more than 15 years ago, when he was ranked 61st; he had turned professional in late August 1996. He remains winless on the PGA Tour since September 2009.
Woods snapped a career-long winless streak of 107 weeks, dating back to mid-November 2009, when he captured the 2011 Chevron World Challenge. Contrary to the Official World Golf Ranking, Tiger Woods still holds the top spot on Forbes’ list of the top 40 sports brands.
Tiger Woods came back only thorough long struggle…but he never gave-up…continuous hammering made him winner at last. That is why he is entitled to be said GREAT, and his struggle THE GREAT STRUGGLE. Let us see…how history repeats itself. But indication is very optimistic again…and on solid ground.

Be the first one to write a review for the book “TIGER” IS BACK!.