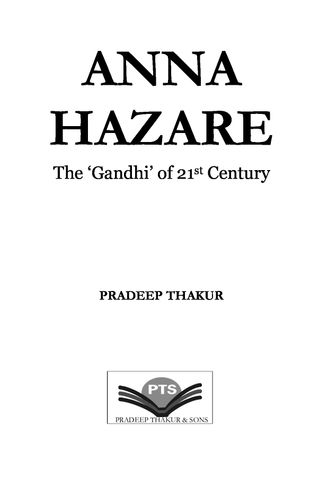 The ‘Gandhi’ of 21st Century

He calls himself a "fakir" a man who has no family, no property no bank balance, and wears only khadi. Anna Hazare starts an agitation; every leader from Mumbai to Delhi sits up and takes notice. His small frail body has taken several blows from the countless agitations, tours and hunger strikes he has undertaken since he came in public life in 1975. Today, Anna Hazare is the face of India's fight against corruption, and regarded as "The Gandhi of 21st centry', because countrymen feels that he is fighting for to realize Gandhijee's drem of SWARAJ and sustainable economic development based on MODEL VILLAGE.
Anna Hazare has soldiered on relentless, from one battle to another in his war against corruption. He fought from the front to have Right to Information (RTI) implemented. He is now fighting for the implementation of the Jan Lokpal Bill.

Be the first one to write a review for the book ANNA HAZARE.