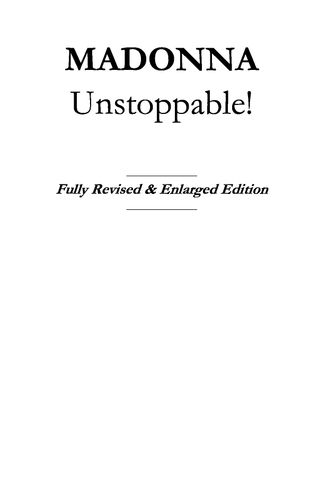 Madonna has been considered to be one of the greatest figures in music and one of the most influential women in history. In 2010, Time magazine included Madonna in the elite list of the “25 Most Powerful Women of the Past Century”, where she became one of the only two singers included, alongside Aretha Franklin. Madonna also topped the VH1’s list of “50 Greatest Women of the Video Era”. In June 2010, for the fist edition, PRADEEP THAKUR had titled the first edtion (2010) of book the “Madonna: The World’s Most Powerful Musician”. Although she didn’t figured in the Forbes Celebrity 100 list, but her activities during last two years (2010-11) clearly indicate that she is unstoppable and destined to move on with unending creations in the years to come defying her age is nearing 60. So, now, the book is updated and enlarged (about 700 pages); and tiled “Madonna Unstoppable!”

Be the first one to write a review for the book MADONNA: Unstoppable!.

On The Path of Science : The Five ...
Belal Ansari

Himalayas: Through Heaven and Hell in the Hills
Praveen Venkiteswara Annu