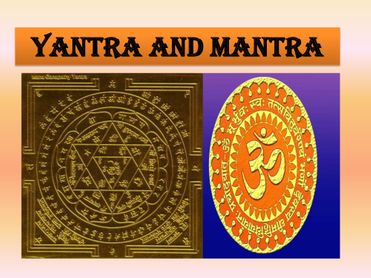 YANTRAS: WHAT IS THEIR PURPOSE

Yantra (यन्त्र) is the Sanskrit word for a mystical diagram, especially diagrams or amulets supposed to possess occult powers in astrological or magical benefits in the Tantric traditions of the Indian religions. Traditionally such symbols are used in Eastern mysticism to balance the mind or focus it on spiritual concepts. The act of wearing, depicting, enacting and/or concentrating on a yantra is held to have spiritual or astrological or magical benefits in the Tantric traditions of the Indian religions.
Shapes and patterns commonly employed in yantra include squares, triangles, circles and floral patterns but may also include more complex and detailed symbols, for instance:
The lotus flower typically represents chakras, with each petal representing a psychic propensity (or vritti) associated with that chakra;
A dot, or bindu, represents the starting point of creation or the infinite, unexpressed cosmos;
The shatkona (şaţkoņa) (Sanskrit name for a Hexagram) is composed of a balance between:
An upwards triangle which according to Tantra denotes energy, or more specifically action and service (seva). It may also denote spiritual aspiration, the element of fire, or Shiva. It is also said to represent the static substratum of the cosmos;[citation needed]
A downwards triangle which according to Tantra denotes spiritual knowledge. It may also denote the creative power of the cosmos, fecundity, the element of water, or Shakti;
A swastika represents good luck, welfare, prosperity or spiritual victory;
Bija mantras (usually represented as characters of Devanāgarī that correspond to the acoustic roots of a particular chakra or vritti).
Geometric element meanings:
Circle = Energy of the element water
Square = Energy of the element earth
Upward-facing Triangle = Energy of the element fire; energy
Downward-facing Triangle = Energy of the element water; knowledge
Diagonal line = Energy of the element air
Horizontal line = Energy of the element water
Vertical line = Energy of the element fire
Point = Energy of the element ether
Ganesha yantra
Ganesha is regarded as a helper in overcoming obstacles and as a patron of students, generally. The textual description given at Shiva Shakti Mandalam indicates that the central hexagon should be circumscribed a central vahni (upward pointing) triangle, instead of, as here, inscribed in it

ANNAPURNA YANTRA
SAUBHAGYA VIJAY LAKSHMI
PANCHMUKHA HANUMAN YANTRA
BAGULAMUKHI YANTRA
Durga yantra
Durga a the warlike form of Devi who is protector of the dharma --- the world order.
Kālī yantra
Kālī is a "fierce" and "terrifying" form of Devi worshipped in many forms of Shaivism. Kālī represents the disintegrative force in nature as displayed in the passage of time (Kāla) or increase of entropy. Kali is black but the other colours used in the yantra (red, yellow, green and white) are also part of her traditional representation.
Kali Yantra
Victory to Mother Kali
VICTORY OF MOTHER KALI
KALI SHAKTI
Kālī (Mahavidya) yantra
This form of the Kālī yantra is used for her representation as one of the ten Mahavidyas or main forms of Devi. The geometry of the central portion is similar to the one used above. Note however, how an additional Shakti triangle is "hidden" by the circle and ring of lotus petals circumscribing the central portion of the yantra. This probably signifies the "hidden" true nature of Devi as Maya (illusion). Note also how the the colours used here are much lighter and harmonious than in the fiercer representation above. This may reflect a preference for more pleasing forms in the Dakshina marga tantric tradition.
Kālī (Mahavidya) yantra
Śyama yantra
This yantra representing the Śyama form of Kali is interesting for its unusually asymmetric form. This is probably also an expression of the iconoclastic nature of the Vama marga (left hand path) form of Tantra. Note also the variation of the surrounding Bhupur (gates)
This watercolour is a variant of the yantra where the artist has tried to adapt the traditional representation into a more symmetric frame. In this case colours traditional to Kali has been used.
Śyama yantra
Chinnamasta yantra
Chinnamasta is one of the ten Mahavidyas. She is usually depicted beheaded and with her life's blood springing out of her open neck. This yantra (and the previous one and the Tara below) are adaptations of material found at the excellent Shiva Shakti Mandalam
Chinnamasta yantra
Tara yantra
Tara exist in various forms, both in Buddhism and in Tantra. All Tara yantras I've come across share the central element of a single Shakti triangle. The one depicted here has tantric origins.
Tara yantra,
Śrī yantra
Śrī or Shree is a name of the goddess Laksmi or Sundari. The yantra and its worship is described in the classic Sanskrit text Sundari Lahari. The Shree yantra itself is probably the most famous and certainly the most complex of all yantras and an amazing geometrical construction.
SRI YANTRA
Pancha Tattva yantra, with Sri Chaitanya and His four associates.
SRI YANTRA
Nava-yoni yantra,Karya Siddhi Yantra, Healing Yantra
MAHALAXMI YANTRA, HANUMATPUJAN YANTRA, SAUBHAGYA YANTRA
DAS KALI YANTRA,BHAIRAVI YANTRA, YANG YANTRA
KALI DAXINA, SAMRAJYA LUXMI YANTRA
KRISHNA YANTRA, PRANAV OM YANTRA
Kamalatmika Yantra, Ashvaruda Devi Yantra
Aikya Madhyama Sukta Yantra, SURYA YANTRA
SHANTI DURGA YANTRA, KRISHNA SUNDARI YANTRA
KUBER YANTRA, NAVAXARI YANTRA
MAHALAKSHMI YANTRA,KARYA SIDDHI YANTRA
Surya yantra,Ketu yantra, NARSIMHA YANTRA
NAVAGRIH BHEESA YANTRA, KALKI YANTRA
Pranava Om Yantra, GAURI SHANKAR YANTRA
PARASURAM YANTRA, SHUKRA YANTRA
CHANDRA YANTRA,MANGAL YANTRA
KALKI YANTRA,Subrahmanya
GURU YANTRA,Dakshinamurti Yantra
SADAKSHARA,MAHAVISHNU
Aikya Madhyama Sukta Yantra,SARSWATI
MAHASUDARSANA,MAHAVISHNU
Sarva Vidhya Maha Yantra, Maha Lakshmi Maha Yantra
Maha Mrityunjaya Yantra,Chamundi Yantra,
Ashvaruda Devi Yantra, Samrajya Lakshmi Yantra
Rama Raksha Yantra, Jupiter yantra Guru yantra
Kalsarp Yog Yantra, Manokamna Mantra
Vashikaran Mantra, Gayatri mantra, Kamdev Vashikaran Mantra
Ganapati Ji Mantra, Santam Mantra
Maan Luxmi Mantra,Hanuman Mantra
Sammohan Mantra,Mahamritunjaya Mantra

Prof. N L Shraman is a renouned and eminent author of various book. The present book is a series in Astrolgy. he has written various books on mind and Pshychology for selfhelp.

Be the first one to write a review for the book Yantra and Mantra- Coloured & Illustrated.

The theory and practice of self-inquiry.
P.V.S.SURYANARAYANA RAJU.