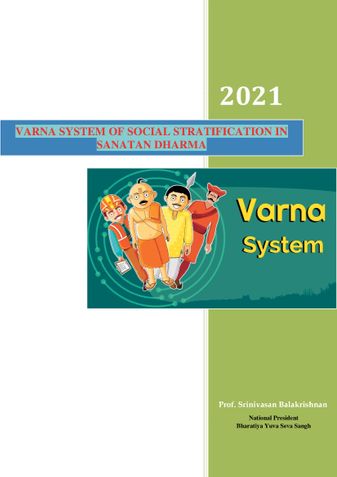 ‘Varna’ is a much misunderstood concept in our Indian society due to its perception through westernised lenses. It is often equated with the ‘caste’ and the ‘caste system’ and is considered as the root cause for discrimination and oppression in the Indian society. This article will enable our society to think in our own Vedic school of thought by analysing Hindu scriptures will reveal that the scriptural conception of Varna has no resemblance to the present practice of caste system.

He is currently serving as Visiting Professor in School of Science, APG Shimla University Himachal Pradesh. Recently Nominated as the Chairman of Aadhan Strategic Solutions Pvt Ltd by their board. As an Editorial board member of many National and International Organizations. Honorary Member of International Society of Zoological Science, China and served as Stu Affiliate of Royal Society of Biology (London). His research Papers were published and accepted in many international scientific journals with good impact factor. He also holds the responsibility of Managing Editor of Royal Reach Publications. An Eminent young scientist who contributed in identification of lead compound in curing cancer from Marine sponges from Bay of Bengal in School of Genomics and Bioinformatics jointly funded by Department of Biotechnology (DBT), University Grants Commission (UGC), India Today Group and Loyola Institute of Frontier Energy (LIFE) and also won Best scientific paper awards from International Institute of Biotechnology and Toxicology (IIBAT).

I am privileged to serve as a Board of Studies member of various Institutions & the Board of Trustees of Indian Institute of Professional Learning (IIPL).I also serve on Advisory Boards of the Communities Foundation known as Jeyabharatam. Appointed to serve as the Member of Commission of Education and Communication (CEC) of IUCN International Union for Conservation of Nature (IUCN) of United Nations Climate Change and Environment Sustainability Mission – 2030.

Be the first one to write a review for the book VARNA SYSTEM OF SOCIAL STRATIFICATION IN SANATAN DHARMA.

The Seed of Race: An Essay on Indian ...
Sir John Woodroffe