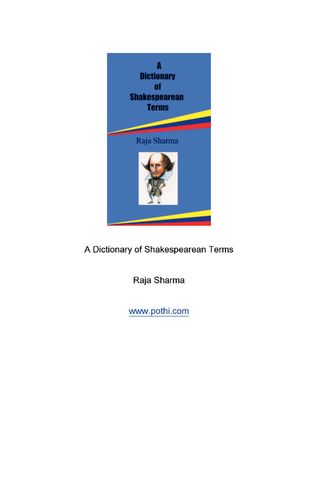 William Shakespeare used very rich and colorful language in his works, but many of those words and terms are outdated and cannot be found in modern dictionaries. William Shakespeare's works sometimes appear to have a language of their own.

Indeed, William Shakespeare did in fact invent many of the words that he used, and these are documented in this Dictionary of Shakespearean Terms.

Inventing new words for the English language seems to be a definite objective for Shakespeare! The words coined by Shakespeare are explained with their full origins and meanings.

It can be difficult to understand the real meanings behind some of the Shakespeare language in the great plays and sonnets. And this is hardly surprising when the expressions and their meanings have been obsolete since the Elizabethan era!

William Shakespeare was not born to the nobility and his Elizabethan education was quite basic as he left school at the age of 13 and never attended University. Neither of his parents could read nor write.

A dictionary was not that important during the era! Yet his vocabulary was massive for a man of his background.

A total of 15,000 different words were used in his plays and a further 7000 were used in his poems and sonnets. This gave him a vocabulary of 21,000 words when the average vocabulary of the day in Stafford, England, was less than 500. Even by today's standards, the most celebrated authors do not exceed an average of 7500 words (The poet, John Milton was an exception and his totaled about 8000) and the average English speaking person only has about 2,000 words in their vocabulary. For a person with a University degree this range in vocabulary would rise to about 3000 to 4000.

This is the only dictionary which has been composed in such a simple way that even a layman can easily find the meaning of any Shakespearean term.

Be the first one to write a review for the book A Dictionary of Shakespearean Terms.