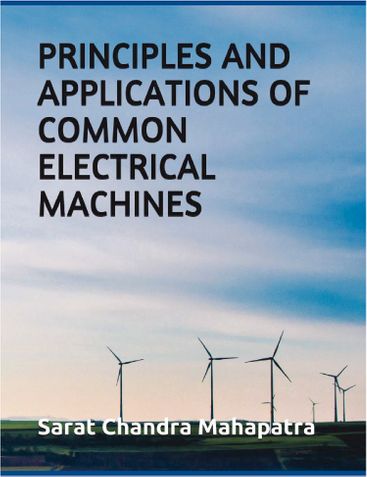 Commonly used electromechanical energy conversion apparatus, and equipment that transform electrical energy from one voltage to another voltage may be classified as Common Electrical Machines. Accordingly, Transformers, Synchronous Generators, Three-phase Induction Motors, Single-phase Induction Motors, Single-phase Series Motors and dc Series Motors come under the category of Common Electrical Machines. Transformers are used in electric power systems, in industries, in electric traction, for electric welding, in electric furnaces, for high-voltage testing, in power electronic devices et cetera. Machines generating single-phase and three-phase power are called single-phase and three-phase synchronous generators respectively. Standby generators of low power rating used during failure of the power supply are generally of single-phase type. Large generators supplying bulk power invariably have three phases. This is because generation, transmission and utilization of three-phase power are economical and more efficient. Generators used in ships are of variable frequency so that the speed of the motors driving the propellers can be varied. Three-phase Induction motors of various ratings are used in medium-scale and large industries. The main application of the dc series motor is in Electric Traction. Single-phase induction motors are used in small industries, workshops, domestic fans and other appliances; Single-phase series motors in fractional kilowatt range are used in portable drilling machines, vacuum cleaners, grinders, mixers and other kitchen appliances. The book describes the principles and applications of all these machines in a systematic manner. It explains the important aspects without delving too much into detail. Some of the unique features of the book are: (1) Step by step development of the equivalent circuit of a two-winding transformer. (2) Necessary conditions for production of electromagnetic torque are described with illustrations. (3) Formula for the resultant magnetic field produced by a three-phase balanced winding carrying three-phase balanced current and rotating at any speed is derived and interpreted. This is in addition to the derivation of the formula for the resultant magnetic field of a balanced three-phase winding carrying three-phase balanced current (4) Several conditions must be fulfilled for synchronizing an incoming synchronous generator with an infinite bus-bar. These conditions have been justified with illustrative examples. (5) The book is student-centric and is suitable for self-study.

Be the first one to write a review for the book Principles and Applications of Common Electrical Machines.

Other Books in Engineering

An idea of self-acting fan without any input ...
Shubhankar Paul