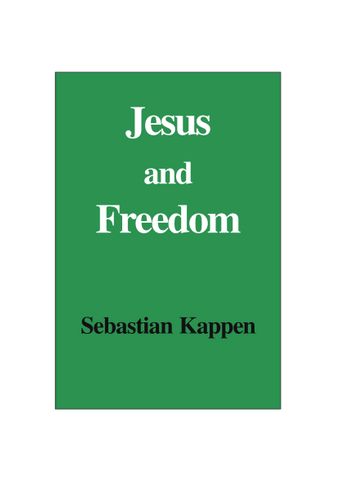 Jesus and Freedom is the first book of Fr. Sebastian Kappen written in 1977. Published by Orbis Books, New York, with an introduction by the famous theologian, Francois Houtart, it became very popular among radical theologians and social activists all over the world. Then it came to the attention of the Vatican, which could not tolerate the way Jesus is presented, in the Asian perspective, as a revolutionary, taken hold of by God. And the book was censored in 1981. Fr. Kappen responded repudiating the very theology that is behind censorship and published his long reply. This was followed by many meetings of theologians and activists supporting Fr. Kappen.
Anyway, the book soon became out of print and this is its second edition. Fr. Kappen’s reply to the Vatican is given as an appendix. As part of the editing, the language has been made up-to-date.

Sebastian Kappen, an Indian Jesuit theologian, doctored in 1961 from the Gregorian University, Rome, with a thesis on ‘Praxis and Religious Alienation according to the Economic and Philosophical Manuscripts of Karl Marx.’ His subsequent studies had been geared to the requirements of transformative social action in India. This led him to an investigation into the liberative and humanizing potential of the original teachings of the historical Jesus as well as of Indian religious traditions, particularly the tradition of dissent represented by the Buddha and the medieval Bhakti Movement. He wrote and lectured extensively on the cultural restructuring of Indian society.
In 1973 appeared Kappen’s major work in English, Jesus and Freedom. It was followed by Marxian Atheism (1983), Jesus and Cultural Revolution - an Asian Perspective (1983), Liberation Theology and Marxism (1986), and The Future of Socialism and Socialism of the Future (1992). His posthumous publications are: Tradition Modernity Counterculture (1994), Hindutva and Indian Religious Traditions (2000), Divine Challenge and Human Response (2001), Jesus and Society (2002), Jesus and Culture (2002), Towards a Holistic Cultural Paradigm(2003), Marx Beyond Marxism (2012), Ingathering (2013), What the Thunder Says(2013).
His books in Malayalam are From Faith to Revolution (1972), A Sexual Morality for Tomorrow (1973), Ecology and Culture (1988), An Introduction to the Philosophy of Marx (1989), Prophecy and Counterculture (1992), In Search of the Non-Christian Jesus (1999), Liberation of Jesus from the Churches (2012), and Death of God and the Birth of the Human - tr. of Marxian Atheism (2015)
Sebastian Kappen had been visiting professor to the Pontifical Seminary (Pune), Vidyajyoti (Delhi), The Catholic University of Louvain (Belgium) and Maryknoll Seminary (New York). Mother Earth called him back on 30 November 1993.

Be the first one to write a review for the book Jesus and Freedom.

Other Books in Theology

To Believe or Not to Believe
Thomas J Korah

HACK ANY WIFI 100% PRACTICAL
By Thorave