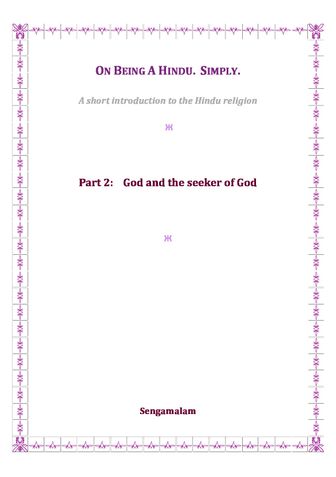 God and the Seeker of God (eBook)

On Being A Hindu. Simply.A short introduction to the Hindu religion. Part 2: God and the Seeker of God

All volumes of 'On Being A Hindu. Simply' are written in an easy and accessible language, and are meant for the general reader. They are non-priced works, and free to download.

In this volume the author examines the relationship between the divine and the devotee, or God and the Seeker of God. The Hindu religion facilitates a direct bond with God, and gives pre-eminence to the devotee. Read together with the first part, the topic of which was 'God', the work presents a picture of the religion as the inclusive, liberal theology it was meant to be.

God and the Seeker of God

Be the first one to write a review for the book God and the Seeker of God.