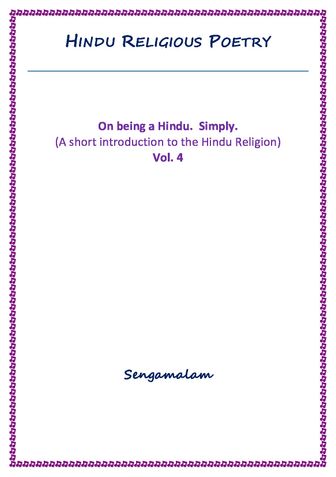 On Being A Hindu. Simply. A Short Introduction to the Hindu Religion

This is the fourth booklet in the series 'On being a Hindu. Simply.' The titles in the series are intended to provide a short introduction to various facets of the Hindu religion as it is practiced by millions of ordinary people. All volumes of 'On Being A Hindu. Simply' are written in an easy and accessible language, and are meant for the general reader. They are non-priced works, and free to download.

In this volume the author gives a peep into the vast treasure trove of Hindu religious poetry by providing translations in free verse of a select few verses from a few compositions.

Through history, the land where the 'Hindu' religion originated has been ruled by people of other faiths. The literature of the religion has been revised, perverted even, and all but forgotten as the language of many of its ancient texts is no longer contemporary and few are able to take up cudgels on its behalf with the strength of true knowledge to back their arguments.

This series on the Hindu religion is an attempt to examine what has made it possible for the religion to survive the vagaries of history and human fallibility.

Read together with the earlier volumes in the series: 'God', 'God and the Seeker of God', and the 'Hindu Ethos', this work presents a picture of the religion as the inclusive, liberal theology it was meant to be.

Be the first one to write a review for the book Hindu Religious Poetry.

Other Books in Poetry, Religion & Spirituality