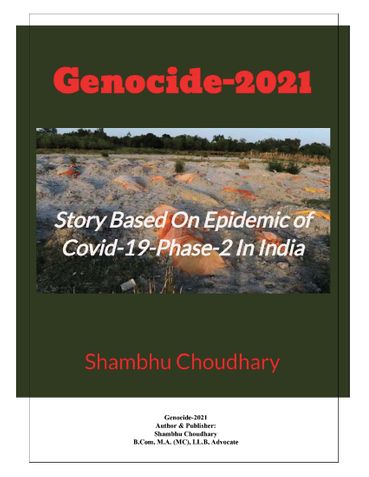 Story Based On Epidemic of Covid-19-Phase-2 In India

Genocide-2021
Hindi manuscript “Mera Goan” Translated With help of
Google Translate
English
In India, the wave of epidemic phase-2 of the Covid-19 virus took away the breath of millions of people in the country overnight, created a disarrangement in the country within just two months. Many High Courts of the country even termed it as a 'genocide'.

In the absence of oxygen, people started dying from hospitals to the streets. The doctors were crying seeing helpless people dying in front of the government malpractices. They were all helpless in saving anyone even if they wanted to. The death toll was said to be several times higher than the official figures.

Government claims all started falling short. From the crematoriums, to the dead bodies flowing in the Ganges, they started shouting and Unmask our systems.
In some states, a fair of dead bodies had been held for miles on both the banks of the river.
There was also no wood to burn the dead bodies. The situation in the villages was even more dire.

The author studied many villages, from Rajasthan to Bihar, the same situation was being told everywhere.
By depicting a fictional village, the author has made a small effort to sum up the situations of all those days in his own words, so that the coming generation can see the condition of how India's 21st century was.

This book is an English translation of my Hindi version "Mera Gaon", which I have done in collaboration, translated with Google. It may be possible have noticed some errors. This is just an attempt to convey my feelings to you.
please ignore my mistake if you find. thanking you.

Writing poems, short stories, and social articles since childhood, publishing short stories, poems, articles on social and political subjects in many newspapers and magazines of the country.

To do independent journalism and awaken the public mind against social evils. To play an active role in the process of amending the law by taking out a procession in the city of Calcutta against the "Devrala Sati Case".

Editing several books on social issues. Organizing the youth of the society and engaging them in developmental activities, socializing politics, and interest in independent journalism. A number of articles by Mr. Chaudhary, who has served as the executive editor of the "Samaj Vikas" social magazine published from Calcutta, have brought changes in the social and political equation. Publication of many books on the subject of law. " Mera Gaon " , his first book on Amazon Kindle.

Be the first one to write a review for the book Genocide-2021.

Other Books in Magazine/Periodical, Sapiential Novel

Journal for Studies in Management and Planning, May ...
JSMAP

WILL YOU COMEBACK GURUJI
V. RAVI