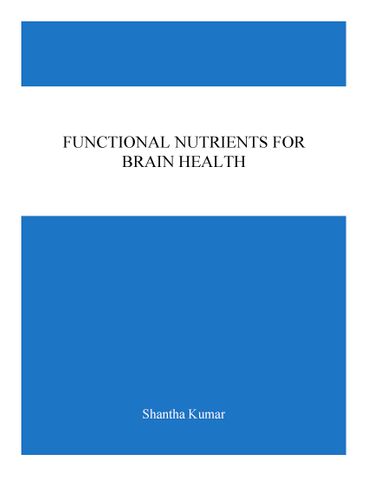 This book aims to portray the role and influence of dietary factors in brain health and its intricate networks and has suggested vegetarian options in diet planning for preserving healthy cognitive functions and preventing disease. The evolution of mammals and humans is marked by a massive expansion of higher thinking abilities which has paralleled changes in associative regions of the brain and inter-neuronal connections. With increasing life span, it has become a challenging issue to preserve the normal functions of the nervous system and prevent cognitive decline due to aging processes. The rising rates of diseases like obesity, diabetes, Alzheimer’s, autism, depression disorders that affect personality and brain health can be countered by dietary practices that establish better equilibrium and homeostasis in the body and central nervous system. Thus, optimal brain health involves nurturing and maintaining these capabilities and the structural and metabolic networks in the brain.

Some of the relevant macronutrients (Caloric Energy, Carbohydrates, Proteins and Fats) and micronutrients (Vitamins, Minerals, Phytonutrients – Flavanoids, anti-oxidants, etc.) and their cellular and systemic functional roles in normal and abnormal health are discussed. Traditional practices in dietary control in cultures with a strong history of mental abilities have been used as the foundation for many of the recipes and suggested diet plans, while scientific advances in our understanding of the nervous system has been used as the rationale for some of the dietary modifications to achieve optimal cognitive abilities and preserve memory functions, especially in the aging process.

Shantha Kumar, a dietitian with a doctorate in the health sciences, has written several books on Nutrition applying scientific knowledge and traditional practices to achieve better health through dietary management. The principles used here are with reference to vegetarian diets, but could be applied to meat-based diets as well, as the nutrients discussed are essentially similar.

Publisher: self
Number of Pages: 148
Availability: Available for Download (e-book)

Be the first one to write a review for the book Functional Nutrients for Brain Health.

GOOD CARB DIETS OVER 350 RECIPIES
SOMEONE ELSE MADE IT BUT I AM AUTHORISED ...