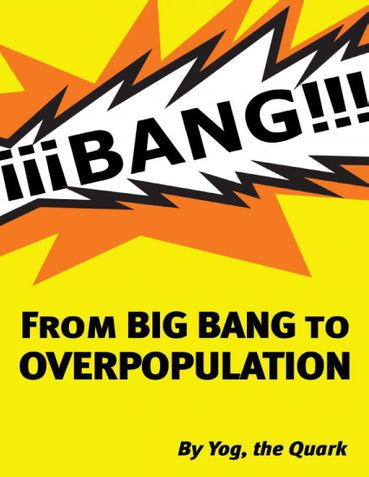 FROM BIGBANG TO OVERPOPULATION (eBook)

The story of the universe from the beginning to the present, told by an eyewitness - Yog , the quark.

FROM BIGBANG TO OVERPOPULATION is an eyewitness account of the evolution of the universe from its very origin to the present. It is told as a chronological story - by Yog, a quark – an eye-witness which was there from the start. Quarks are the oldest existing particles in the universe. Quarks know everything, since everything is made of quarks and electrons – everything, including you and me. Since they have no emotions, quarks are absolutely objective and so is Yog's narrative.

The book consists of two parts which can be read independently.
In the first part, Yog describes the evolution of the universe from the very beginning, the formation of particles, atoms, matter, galaxies, stars, comets, of our solar system, of planet Earth. A review by a German physics professor endorses the scientific plausibility of the narrative. It continues with the evolution of life, from the first single cell beings to the purportedly most intelligent form of life on the planet, Homo sapiens, humans or earthlings. The arch-continent Kaapvaal Craton and fossils of single and multi-cellular creatures in Southern Africa are highlighted. Yog relates evolution as it really happened, not in fragments and assumptions - as human scientists unfortunately have to. Yog determines the key event that distinguished man from beast.
The second part of the book relates the evolution of humanity up to modern humans. It finds that earthlings have overtaken biological evolution by technological development and predicts that evolution does not end with today’s Homo sapiens but continues towards a more rational being which he calls Homo prudens. Being now part of an earthling, Yog knows the characteristics of humans too. It describes some of their peculiarities, including their weird sexual behaviour compared to other mammals. The development of click language in Southern Africa, probably the mother of all languages, is described. Yog distinguishes the most urgent problem on the planet, presently the root of nearly all other problems on Earth, the issue that seems to be shrouded in a taboo - overpopulation by human beings. It is not politically correct to declare that there are too many humans on the planet; it is heresy to dare say that the human population must be reduced. Could the 14 billion years success story of the evolution of the universe culminate in collective suicide of the most intelligent species on this insignificant but cute planet? Yog even dares to make a prediction.

FROM BIGBANG TO OVERPOPULATION is written in plain language to be easily understood by the average person – from teenagers to pensioners. All you have to be is curious. There are no formulas, graphs or diagrams, to avoid the appearance of a text book. The text is however, livened-up by a series of cartoon-like sketches.

The ghost writer of FROM BIGBANG TO OVERPOPULATION, Siegfried Eckleben was born in Weimar, Germany on Labor Day, May 1st, 1944.
(It started with labor and he's been laboring ever since). His family fled the Russian Zone of post war Germany in 1949 and emigrated to what is now Namibia. He grew up and attended school in what was then South West Africa and studied electrical engineering at the University of Cape Town, South Africa.
Having lived and worked mainly in Southern Africa, North and South America, Australia and Europe, he has now retired back to Namibia – and another residence on one of the Azores Islands in the North Atlantic.
The enigma of the endless universe and concepts such as eternal and infinity awed and intrigued him since childhood and eventually drove him to write the first part of FROM BIGBANG TO OVERPOPULATION. The peculiarities of humans that he was confronted with during his lifetime motivated him to write the second part.
Siegfried speaks five languages and has written newspaper articles in English, German and Portuguese.

FROM BIGBANG TO OVERPOPULATION

Be the first one to write a review for the book FROM BIGBANG TO OVERPOPULATION.