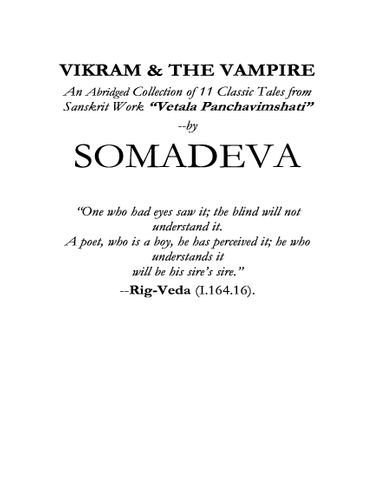 Now, enjoy the improvised edtion of VIKRAM & THE VAMPIRE. It is an abridged collection of the 11 most entertaining tales and legends of “Vetala Panchavimshati”. It is the series of spellbinding stories told to the wise King Vikramaditya by the wily ghost Vetaal., the Vampire. Sir Richard Burton abridged and translated and her wife Isabel Burton edited the original Sanskrit works. It was first published by Kama Shastra Society of London-Benares; for private circulation only in 1870. No doubt Bruton was fascinated by Sanskrit as were other open-minded free thinkers since India was colonised by England at the beginning of the 17th-century. He explained the terms as he conceived, half or full or none. So, Pradeep Thakur has completely replaced the Footnotes, with a detailed glossary. The Glossary goes full-length of about 200 pages; with great detail and all possible information to each term, so it could be critically analysed and be understandable in true sense.

Be the first one to write a review for the book Vikram & the Vampire (Improvised Edition).