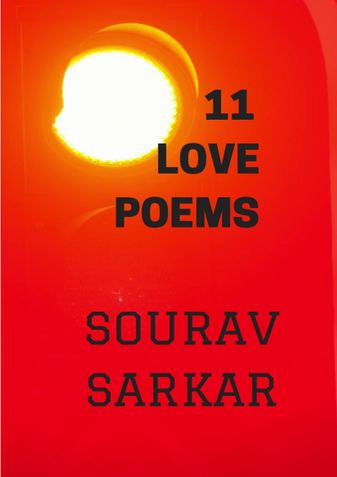 11 love poems is a book of eleven romantic poems.First ebook of poems by Sourav Sarkar

Sourav Sarkar was born in Cooch Behar district , West Bengal, INDIA. He went to Jenkins school ,Cooch Behar for higher secondary education. He received graduation in English Literature from University B.T & Evening college . Post graduate from St. Joseph’s college Darjeeling in English Literature . Fore mostly he is a poet and he is Writing in both Bengali and English language. He is also writing critics , short stories and novels .He started writing since 2003, right from school days. His poems appeared in many little magazines like uttar vumika,uttarer haoya,chetona,angikar,ichhedana,setu ,etc. He wrote in famous dailies- “Ananda Bazaar Patrika”, “Uttar Banga sambad Patrika” ,“Ajkal” and his name appearedin“Coochbehar-Times”,“Coochbehar-samachar”“Muktalipi” occasionally .Apart from that he wrote in many Englishmagazines,like-Indian periodical,Randompoemtree,Tuck,Scarletleafreview,Musendia,poetry.com,poetfreak.com.writerscafé,poemhunter,poetsIndia,poetrysoup,poetrypoem,allpoetry.com,poemlist.com,banglakobita.com.etc.All India Radio Siliguri broadcasted him as young poet. His poems so far published in the countries like England,India,Bangladesh,America,Canada,Trinidad,etc.Famous,Indian-English-poet Padmashree and Sahitya Akademi winner Jayanta Mahapatra read his poem and advised him to write more. He was first to join from Cooch Behar as a poet to the poetry reading event by Poetry Society India at Jawaharlal Nehru University,Delhi.At the age of 28,Sourav Sarkar got his first award for Literature a( SAHITYAR NAKSATRA OR STAR OF LITERATURE ),Mohanlal Majumdar Prize. He is a published writer of two books-DUTI SOHOR O KICHU KOBITA( first Bengali collection of poetry)and his first micro novel- THE PURI SELLER both published in the year 2016.2017 his 3 poems appeared in world anthology Dandelion in a vase of roses. He is first Indian poet who got invitation to Downing college by Cambridge University magazine Notes ENGLAND.His poem Green peace had been published in London,12nov2017.

2018 his poem we are one appeared in world anthology World Healing World Peace.
He was among 103 writers of world.

Be the first one to write a review for the book 11 love poems.

Even in the shadows
ratul banerjee