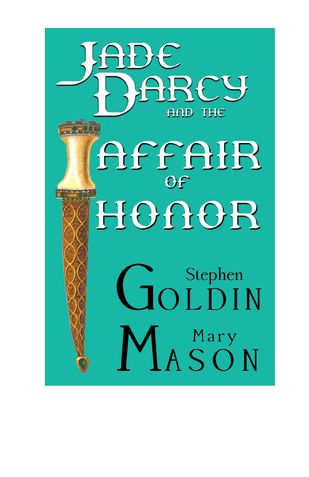 Jade Darcy and the Affair of Honor (eBook)

For the past five years, Jade Darcy has not seen another human being. A computer-augmented mercenary, she lives on the planet Cablans, a stopover point for traders from hundreds of worlds -- and a good place to meet customers who need the services of a skilled warrior.

She turns down what she considers a suicide assignment: traveling to an enslaved world to assassinate one of its military leaders. But then she learns there's another human being on Cablans -- a human being with the potential to expose Jade's mysterious past, with possibly fatal results.

All of a sudden, a suicide mission looks positively appetizing....

This is the first published volume in the Rehumanization of Jade Darcy series.

"A legend returns. Long before there were any buffed Xenas or xenophobic Buffies in the pantheon of fighting females, there existed a remarkable woman warrior named Jade Darcy: a computer-assisted mercenary so formidable and so smart that the Dark Angel, Friday and the Bionic Woman together would have hesitated to piss her off--yet so emotionally mixed up that she broke your heart. Even better: unlike any of those ladies just named, this jade's adventures were most definitely not rated PG. Indeed it was her creators' deep insight into female sexuality and spirituality, as much as their mastery of action scenes, that gave Jade Darcy an uncommon plausibility, a realness, so often missing in other woman-warrior fictions. The restoration to print of the two volumes of the Rehumanization of Jade Darcy series is long overdue, and most welcome; you'll have to go a long way to find a more addictive heroine.

<a href="http://stephengoldin.com">STEPHEN GOLDIN</a> is a Nebula Award finalist science fiction and fantasy writer who was born in Philadelphia in 1947 and has lived in California since 1960. He received a Bachelor's degree in Astronomy from UCLA and worked as a civilian space scientist for the U.S. Navy for a few years after leaving college, but has made his living as a writer/editor most of his life.

He served the Science Fiction and Fantasy Writers of America as editor of the SFWA Bulletin and as the organization's Western Regional Director.

He has lived with cats all his adult life. Artistically, he enjoys Broadway musicals and surrealist art. Some of his other ebooks include THE ETERNITY BRIGADE, POLLY!, A WORLD CALLED SOLITUDE, and The Parsina Saga fantasy series. His online bookstore is <a href="http://parsina.com">Parsina Press</a>.

MARY MASON was born in Bakersfield and has lived in California all her life. She earned a Bachelor's degree in Psychology from CSU Sacramento, and has worked counseling abused children. Her first husband was a member of "Hell Bent For Glory," a pre-Hell's Angels motorcycle gang, but she made the bikers check their weapons at the door and wash her dishes, in exchange for her fine cooking. Her philosophy regarding martial arts is, "My black belt beats your black belt, because my black belt's in Smith & Wesson." She is also a sound lady, mixing live music for bands--usually Chicago blues and S.F. rock, but also swing, folk, and both Country and Western.

She has run several Nebula Award banquets for the Science Fiction and Fantasy Writers of America as well as science fiction conventions, and founded the 1993 San Francisco WorldCon bid. In 2012 she co-authored <a href="https://www.smashwords.com/books/view/134903">Throwing Lead: A Writer's Guide to Firearms (and the People Who Use Them)</a> with J. Daniel Sawyer.

Jade Darcy and the Affair of Honor

Be the first one to write a review for the book Jade Darcy and the Affair of Honor.

The Sword With The Ruby Hilt
Mrudula Govindaraju

The Lady of Lorelei
Alexander Stone