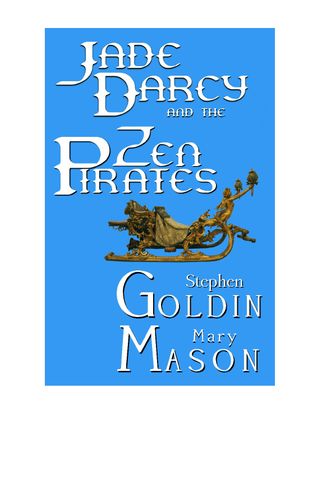 The exciting sequel to JADE DARCY AND THE AFFAIR OF HONOR.

At first, expecting her new job to be easy, Jade Darcy is oblivious to the religious strife wracking the world of Restaapa.

Jade and Megan Cafferty, her employer, discover that the Restaapans are in the process of choosing a new heir to the throne. During this process, the candidates hatch plots against anyone they see as a danger to their victory. Each one of them will go to any extreme, even murder, to assure his election as Restaapa’s heir.

Jade and Megan are pegged as threats that must be eliminated. And Jade has the difficult task of restoring order to Restaapa as well as protecting her own life.

"You'll have to go a long way to find a more addictive heroine."--Spider Robinson

<a href="http://stephengoldin.com">STEPHEN GOLDIN</a> is a Nebula Award finalist science fiction and fantasy writer who was born in Philadelphia in 1947 and has lived in California since 1960. He received a Bachelor's degree in Astronomy from UCLA and worked as a civilian space scientist for the U.S. Navy for a few years after leaving college, but has made his living as a writer/editor most of his life.

He served the Science Fiction and Fantasy Writers of America as editor of the SFWA Bulletin and as the organization's Western Regional Director.

He has lived with cats all his adult life. Artistically, he enjoys Broadway musicals and surrealist art. Some of his other ebooks include THE ETERNITY BRIGADE, POLLY!, A WORLD CALLED SOLITUDE, and The Parsina Saga fantasy series. His online bookstore is <a href="http://parsina.com">Parsina Press</a>.

MARY MASON was born in Bakersfield and has lived in California all her life. She earned a Bachelor's degree in Psychology from CSU Sacramento, and has worked counseling abused children. Her first husband was a member of "Hell Bent For Glory," a pre-Hell's Angels motorcycle gang, but she made the bikers check their weapons at the door and wash her dishes, in exchange for her fine cooking. Her philosophy regarding martial arts is, "My black belt beats your black belt, because my black belt's in Smith & Wesson." She is also a sound lady, mixing live music for bands--usually Chicago blues and S.F. rock, but also swing, folk, and both Country and Western.

She has run several Nebula Award banquets for the Science Fiction and Fantasy Writers of America as well as science fiction conventions, and founded the 1993 San Francisco WorldCon bid. In 2012 she co-authored <a href="https://www.smashwords.com/books/view/134903">Throwing Lead: A Writer's Guide to Firearms (and the People Who Use Them)</a> with J. Daniel Sawyer.

Jade Darcy and the Zen Pirates

Be the first one to write a review for the book Jade Darcy and the Zen Pirates.

Into the Future
Swapnil Saurya

Operation Maya - The future of warfare is ...
Girish V

Into The Future
Muralidhar Mutnuru