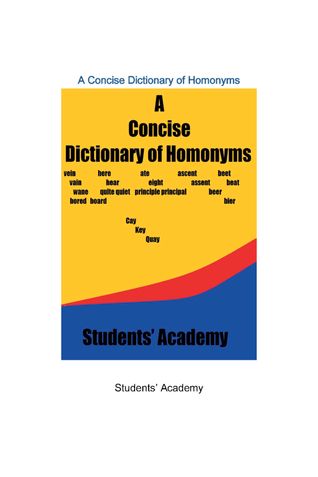 A Concise Dictionary of Homonyms (eBook)

Homonyms happen to be groups of words that may have similar spelling and pronunciation but different definitions or meanings.

In linguistics, homonyms are studied under the diction and sound system. Homonyms are at the same time homographs, which happen to be words that have the same spelling, irrespective of their pronunciation and homophones.

In linguistics, homophones are words that have the same pronunciation, though their spelling may be different.

Stalk: follow or harass a person
Stalk: part of a plant

Left: past tense of leave
Left: opposite of right

In linguistics, they often make a distinction between "true" homonyms and "polysemous" homonyms.

‘True’ homonyms are unrelated in their origin.

Skate: glide across the ice
Skate: the fish

"Polysemous" homonyms happen to have a shared origin.

Mouth: of a river
Mouth: or an animal

Sometimes, both homographs and homophones are confused as homonyms.

"Homonym" is a word in the Greek language. It means' having the same name 'or’ common name.’

In this present dictionary, you will find almost all the words that are often used as homonyms. There are more than a thousand entries in this concise dictionary. This dictionary has been particularly designed to help teachers and students of linguistics and the English language.

A Concise Dictionary of Homonyms

Be the first one to write a review for the book A Concise Dictionary of Homonyms.

CHALLENGES AND CHANCES FOR INDIAN BUSINESS IN POST ...
Dr.D.Venkatramaraju & Dr.J.Kannan