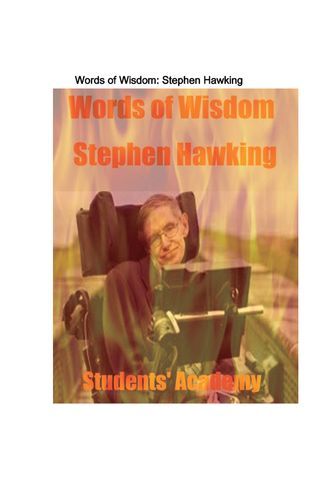 Stephen Hawking was a great scientist and warrior who continued his pursuit of knowledge in spite of being attacked by motor neuron disease. When he contracted the disease in the year 1963, he was told that he had only two more years to live, but he did not get discouraged and continued his struggle, becoming a brilliant researcher and Professional Fellow at Gonville and Caius College.

There is probably no other scientist who has understood the world and universe in such a beautiful way as Hawking has. The books written by him are full of his scintillating wisdom and knowledge that he willingly shares with others.

Several of his remarks, statements, and lines have become very popular quotations. Not only science students, but also ordinary people, can benefit greatly from the words of this great man.

The current collection contains hundreds of his illuminating lines and quotes, which are sure to enlighten the readers.

Be the first one to write a review for the book Words of Wisdom: Stephen Hawking.